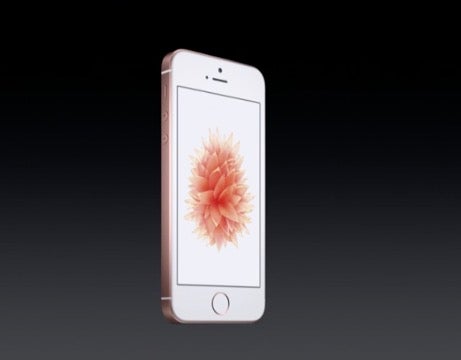 Apple unveiled the iPhone SE at its “Let Us Loop You In” event today in California. The latest iOS smartphone from Apple breaks tradition with the company’s longstanding practice of only introducing new phones in the fall. But Cupertino isn’t letting tradition get in the way of announcing its latest offering: a 4-inch, 2016 device. It will cost $399 for a 16 GB model, and starts at $17 per month on a payment plan.

The iPhone SE brings with it a faster A9 processor (the same in the iPhone 6S), and a 12 megapixel camera with Live Photo support–Apple’s version of the GIF-like moving image. The inclusion of NFC brings Apple Pay to all screen-sizes of the iPhone lineup, not just the 4.7-inch and 5.5-inch devices, the iPhone 6/6S and 6/6S Plus.

In the past, Apple was among the few smartphone makers to place an emphasis on one-handed use. While handset makers made larger and larger smartphones and even “phablets,” Apple’s 4-inch phone remained its flagship iOS device in 2013 and partly into 2014, with the iPhone 5 and 5S. Before that, all iPhones from the original through to the iPhone 4S had displays measuring 3.5 inches diagonally.

When the company introduced their first “large” phones back in 2014, the 4.7-inch iPhone 6 and the 5.5-inch iPhone 6 Plus, Apple developers included Reachability–the ability to double press the home button to lower half of what’s on screen for easy-reaching.

Apple may have preferred simple product lineups in the past. But in the Tim Cook era of iDevices, offering choice is the name of the game. If the customizability of Apple’s Watch line and the various sizes of the iPhone and iPad are any indication, an update to Apple’s smallest iPhone line is a logical one. For many users with small hands, the iPhone 6 and up make little sense. An improved smaller iOS device like the iPhone SE will give many 4-inch phone fans more reason to stay on Apple’s side of the fence.

We’ll be bringing you updates from the Apple event as details unfold. Check back with PopSci for more Apple event coverage!