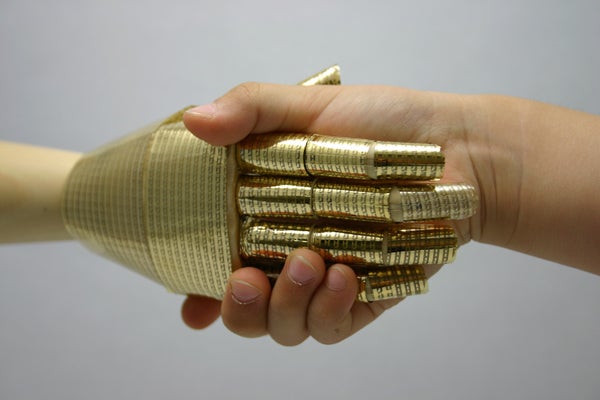 Like it or not, the day is coming when we’ll live side by side with humanoids. But although most modern robots can grip objects and avoid walls, they lack a vital quality in any companion: feeling. They don’t need to get your jokes or sense that you had a bad day, but without all-over sensors that can detect things like motion and body heat, there’s nothing to tell them that, for instance, they’re stepping on the baby. 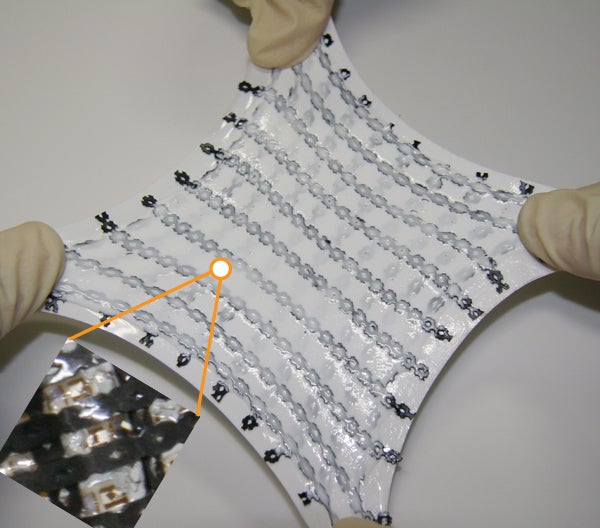 A sample of rubber-like circuits that can twist, stretch and bend without losing conductivity.

That’s about to change. In August, University of Tokyo researcher Takao Someya made elastic conductors that could someday give robots humanlike skin. Until now, no one had succeeded in combining the conductivity of metals with the flexibility of rubber—most elastic materials have near-zero conductivity. The new skin combines a salty liquid with malleable single-walled carbon nanotubes that can stretch to 134 percent their original size and improve conductivity by 570 percent. Equipped with sensors, the material could detect pressure and heat to recognize a tap on the shoulder or gauge the strength of someone’s grip.

The same technology could be applied to such things as steering wheels to measure a driver’s grip to detect drowsiness. It could also be used in electronics, creating simpler iPod controls or expanding computer screens. The fabric needs further development—Someya is still trying to figure out how to sustain softness and elasticity in the rubber without compromising conductivity—but he expects to work out the kinks and start incorporating his robot skin into humanoids within five years.