The Innovative Chemistry Of Tinsel

Plus, tinsel experiments you can perform at home 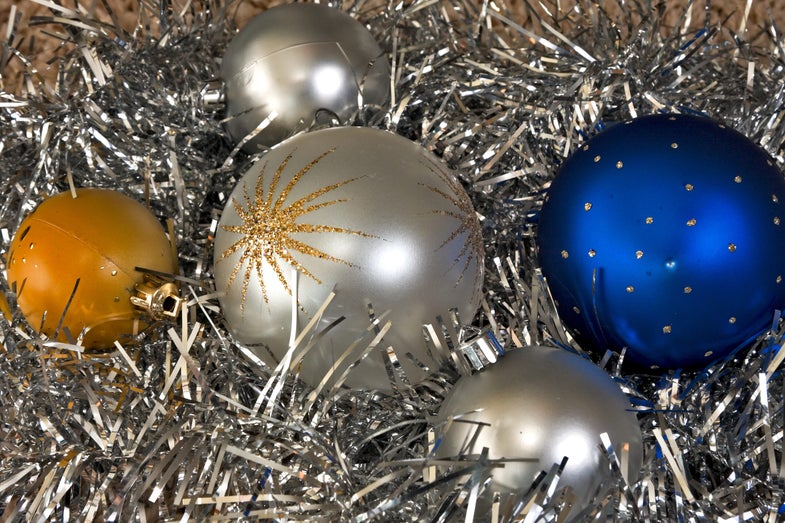 Five different round baubles used as ornaments to decorate the Christmas tree. All of them are standing on several strips of shiny tinsel. The gray one in the center has a golden sparkling star with long rays. Next to it there is a deep blue one with yellow dots replicating the midnight sky. Horia Andrei VARLAN
SHARE

Have you ever wondered what tinsel is made of? Me, neither. But at one time, it was a big deal. Until 1972, many mass-produced tinsels were made using lead, Chemical & Engineering News reports. The U.S. Food & Drug Administration put a stop to that, for obvious reasons. Yet lead-based tinsel was so beloved, the FDA didn’t publicize the change at first.

“The decision was made internally not to publicize it because we feared that many people preferring the lead variety would stockpile it,” Malcom Jensen, then the FDA’s director of product safety, told the Associated Press in November 1972.

Chemical & Engineering News has a great history of the chemical makeup of tinsel. The site includes details about real gold and silver tinsels, flammable tinsel (that was an unintentional side effect), and tinsel patents. We would have never guessed the cheap, sparkly stuff was once such a focus of chemical innovation. But then we searched our own archives and found many, many references to tinsel, often for home experiments. Some highlights:

September 1892: Attach tinsel to the ends of a tuning fork to visualize the fork’s vibrations. This experiment is just one of 120 designed to teach people about the physics of sound.

In the same issue, the magazine published a 14-page story about mica, a silicate material that creates shiny flecks in granite and other rocks. “Considerable amounts” of mined mica go into Christmas cards and tinsel, the magazine reports.

September 1924: “Fine threads of spun glass, as is used for sparkling tinsel on Christmas trees, are being made into wigs for women by a newly discovered process, which may set a new style.” There’s no further explanation.

December 1934: In the midst of the Great Depression in the U.S., Popular Science Monthly offered instructions for making Christmas decorations at home. Many projects involved covering objects with glue and tinsel. Many tinsels at this time would have been made with lead alloy foils.

April 1942: Tinsel goes on fancy fisherman’s flies you can make at home.

November 1960: A factory that makes TV cabinets uses tinsel for the opposite effect of a Van de Graaff generator—to reduce static electricity on the assembly line.