"What's your catch of the day?" 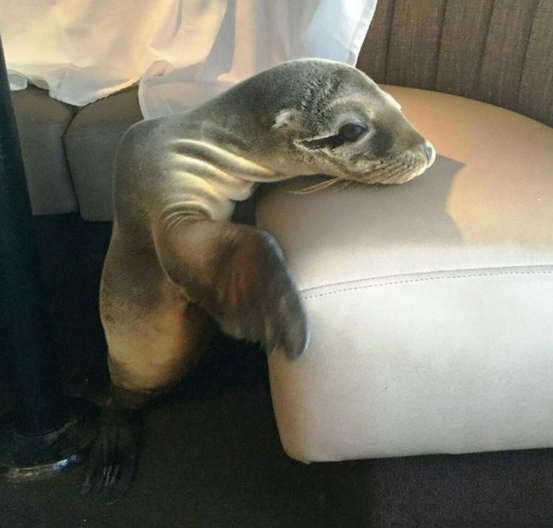 Someone’s got good taste. A hungry sea lion pup wandered into a beachfront restaurant in San Diego last week, charming the chef and taking a seat (and a nap) in one of the booths.

Instead of feasting on black tea rum smoked salmon or french toast, the sea lion pup was quickly taken into the custody of one of Sea World San Diego’s rescue teams. The pup, now nicknamed Marina, had a host of health problems, including being malnourished, dehydrated, underweight, and with one of her eyes swollen shut.

The hope is that with treatment and a rest, she might be able to recover, and once again be released into the wild.

Sea lion strandings are becoming more common in California, spiking in 2013 and 2015. Another sea lion pup made headlines last year when it was found wandering the streets of San Francisco. Sea lions don’t usually come onto land in search of food, but sometimes they get desperate, especially when the number of fish in the sea start to decline (due to algal blooms, overfishing, El Nino, or a combination thereof).

Pups in particular are being stranded when their mothers can’t find food nearby. Luckily, NOAA’s National Marine Fisheries Service reports that once a sea lion pup has been treated and given food and fluids, they can typically return to the wild and survive.