How It Works: The Toy That Thinks

What makes Pleo, the long-awaited toy dino from Ugobe, able to respond to its surroundings and learn from its environment? We take a look at his high-tech innards to see 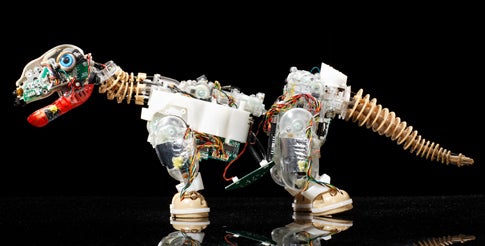 Four years in the making, Pleo, from California start-up Ugobe, is a baby dinosaur robot that acts and learns like a real animal, remembering traumatic experiences and friendly owners. We peeled off its skin to reveal more than a dozen motors, six processors and 38 sensors behind its personality.

Vision: An infrared transceiver in the nostrils constantly bounces beams off surfaces to tell Pleo what’s ahead (and to keep him from walking off a table). The full-color camera above his nostrils provides more detail on an object’s shape. Pleo sees up to 15 feet away and notices light changes (he sometimes cries in the dark).

Hearing: Pleo has microphones on both sides of his head. He can identify the direction of a noise by determining in which ear the sound is loudest or, as we do, by sensing in which ear a sound arrives first.

Motion: Pleo’s main processor sends data to four less-powerful processors, each of which runs up to four motors simultaneously and controls movements in Pleo’s 15 joints.

Feeling: Eight capacitive sensors, which look like pieces of foil, detect the electrical charge from your fingers. (The iPhone works the same way.) Pleo distinguishes among touches by measuring the duration and location rather than the force. That data goes to the main processor (below), which can receive messages from several sensors at the same time, so Pleo can respond to multiple touches.

Learning: Pleo’s main processor (the white plastic box inside the trunk) triggers actions based on physical input—put his plastic leaf in his mouth, for instance, and if he’s hungry, he’ll chew on it—as well as information stored on internal flash memory. The episodic, or short-term, memory stores a limited number of events that the processor determines to be significant, like the time Pleo sensed being held up by his tail. But he can also record cumulative memories, like how many times you touch each sensor, and act accordingly. If he knows that you typically scratch him under the chin, he’ll crane his neck out and coo for it.

Snoozing: To prevent Pleo from overheating inside of his lifelike soft rubber skin, an internal thermostat tells the processor to make him less active as his temperature rises.

Stomping: Sensor pads in Pleo’s paws can detect the texture of the surface being walked on and relay the information to the central processor.

Skeleton: The Pleo’s bone structure is modeled after the fossilized bones of a real Camarasaurus. A pivot in the middle of its two-part spine allows Pleo to wiggle his torso.