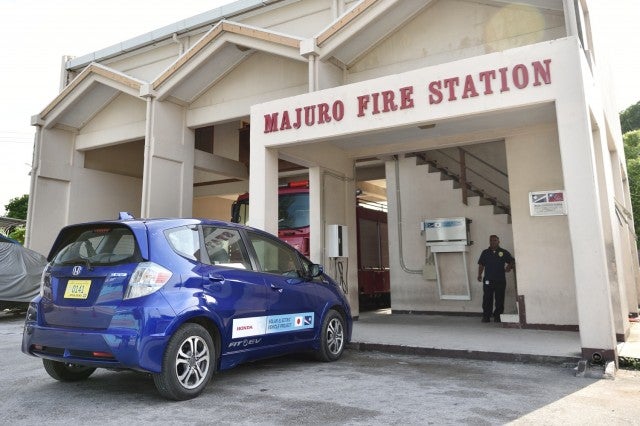 It’s far from the carmaker’s home market of Japan, or its major markets, like the United States and Europe.

In fact, it’s far from pretty much everywhere on earth.

The location in question is the Republic of the Marshall Islands, a nation comprised of 1,156 individual islands near the equator in the Pacific Ocean.

These remote islands were the site of bloody fighting during World War II, nuclear testing during the Cold War, and are now particularly vulnerable to the effects of climate change.

Beginning this week, Honda will jointly conduct testing with the government of the Marshall Islands of a solar-powered AC charging station called the Honda Power Charger.

With support from the Japanese Ministry of Economy, Trade and Industry, Honda and the Marshall Islands government will conduct a pilot testing program using the charging stations, and a small fleet of Fit EV electric cars.

Initial results will determine whether more widespread installation of charging infrastructure throughout the Marshall Islands would be worthwhile.

Honda notes that the Marshall Islands must import the majority of its energy supplies.

Increased used of renewable energy is meant to help the country achieve a greater degree of self sufficiency, and to reduce the energy costs associated with transportation.

So the country has an even greater incentive to reduce greenhouse-gas emissions.

For its part, Honda is laying the groundwork for a return to the plug-in car market after a brief hiatus.

The carmaker recently withdrew both the Fit EV and the Accord Plug-In Hybrid from the U.S., and neither car sold in great numbers to begin with.

Honda plans to launch a new battery-electric car and a new plug-in hybrid in 2018, but has not provided any specific information on either model.