With cases skyrocketing and health resources scarce, Saphale in Maharashtra faces a bleak season of loss and hardship. 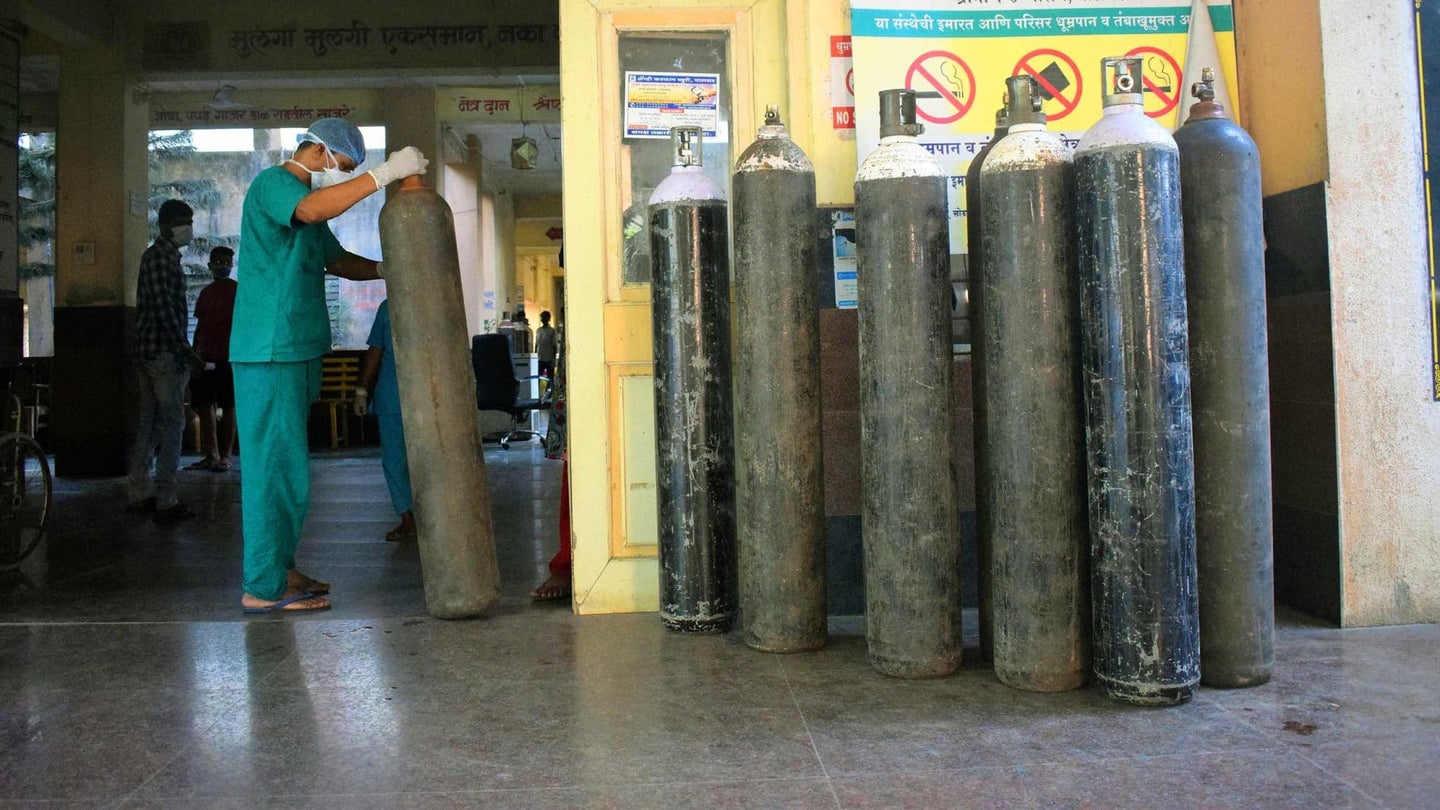 Puja Changoiwala is an award-winning independent journalist and author based in Mumbai. She writes about the intersections of gender, crime, human rights, social justice, and development in India. This story originally featured on Undark.

When 55-year-old Shrirang Gavde began gasping for breath at his home in the western Indian state of Maharashtra on April 24, his wife and son sat him in an auto-rickshaw and commenced their desperate search for a hospital bed. Over the next few hours, they visited roughly 15 facilities near their village in the Palghar district of the state, only to be turned away each time. Eventually, Gavde’s oxygen saturation levels plummeted, and by the time they’d arrived at a hospital that seemed promising, he was already dead.

For two hours, the family stayed with the body in the auto-rickshaw, waiting for a doctor to check him. No one came.

During the first wave of the pandemic last year, such scenes were initially limited to India’s densely populated cities. But as a second wave of COVID-19 now ravages the country, wide swaths of rural India—home to nearly 900 million people, often with far fewer resources—now find themselves in the pandemic’s grip. “A lot of people are trying to run around and access care,” sats Anant Bhan, a global health researcher affiliated with the Kasturba Medical College in Karnataka, “because our health system is relatively much weaker in rural India.”

The escalating scourge and the shortage of available emergency services has prompted a sort of mass migration, with thousands of villagers flowing toward urban centers—sometimes in other states—in a desperate attempt to find care. Others, seeing few options, are turning to pseudoscientific healers for unproven treatments. And as the death toll rises, those who are not yet ill face a wrenching loss of livelihood, as renewed COVID-19 restrictions confine them to their homes and push them deeper into poverty.

“There are many patients here, whom their families rushed to hospitals. However, there were no beds, oxygen cylinders, and ventilators available,” says Jatin Kadam, a 39-year-old schoolteacher in Saphale, another village in the Palghar district—a mostly rural region and among the worst hit areas of the state, with more than 88,000 total cases as of this week, and only a few thousand hospital beds. Intensive care spots are filled to capacity, and there are currently no ventilators available, according to government data.

“There has been such an increase in the number of deaths,” Kadam says, “that we don’t even remember all their names.”

While rural residents represent 66 percent of India’s population, nearly 60 percent of hospitals, 80 percent of doctors, and 75 percent of clinic-pharmacies are located in urban areas. There are roughly 3.2 government hospital beds per 10,000 people in rural areas. Even in non-pandemic times, this means that the lives of India’s rural residents are typically shorter by four to five years, on average, compared to their urban counterparts.

As of India’s 2011 census, the village of Saphale has a population of 4,396 people. That number has been rapidly growing, according to Amod Jadhav, head of the village. However, Saphale still does not have a government hospital. A primary health center (PHC) acts as a referral unit, but it is unequipped to handle COVID-19 cases. Jadhav said Saphale’s PHC also caters to about 15 other villages in the region, with a total population of 85,000 to 100,000.

“In this second wave, we have more cases in a month than we had in six months during the previous wave,” Jadhav says.

“Last year, even those who were admitted for a month, they recovered and returned home,” he adds. With this wave, he said, death comes more quickly.

With Palghar situated some 17 miles away, poor Saphale villagers hoping to find care face a long journey—and a high likelihood of being turned away. Other larger cities, like Vasai or Virar, are 30 miles away. For the gravest health issues—and a fast-rising number of cases are grave—villagers would have to try their luck in Mumbai, which requires a 55-mile journey. “People are used to it that if there is an emergency,” says Swapnil Tare, who heads an educational organization in Saphale, “there is no option other than Bombay,” referring to the city by its former name.

The schoolteacher, Kadam, suggests that the situation ought to have been avoided. The population of Saphale has grown steadily over the last decade, he says. But essential services and infrastructure have not kept pace, leaving villagers acutely vulnerable to a virus that, for want of locally available health infrastructure, many would survive. “Because there was no hospital, they could not be saved,” Kadam says of a few patients in the village, who, he believes, would have lived, had they received timely medical intervention.

At the closest government hospital to Saphale, the Government Rural Hospital in Palghar, Rajendra Raut, a local driver, sat on a pavement outside, praying for his 40-year-old brother’s recovery. Raut had searched numerous hospitals before finding a place for him here, after his brother’s blood oxygen saturation levels had dropped to 37 percent. (The normal range for adults is 95 to 100 percent.)

Nearby, Amrit Shrivastava, stood in the hospital compound. He had struggled for a full night before he found a bed for his 69-year-old father, who had developed a fever and needed oxygen. “Since the workload is so much,” Shrivastava says, even the doctors “are crippled.”

Nikhil Mestry, a Palghar-based journalist, estimates that a single doctor caters to 300 to 400 people in the city. Health workers in the district, he says, are now working round the clock, often without time for even the briefest of breaks. Doctors are “wearing diapers for urination,” Mestry says, “ones that old people wear.”

It didn’t have to be this way, Mestry adds. District authorities knew that the number of patients would likely rise exponentially in April, Mestry says. And yet, they did nothing to prepare.

In the early days of the pandemic, misinformation was rampant—particularly in far flung villages like Saphale. Tare says that many villagers were convinced that COVID-19 is a hoax. And because families of deceased COVID patients are unable to see or examine their loved-ones’ bodies—a tack designed to prevent further disease spread—rumors of illicit organ harvesting have been rampant.

Owing to press reports about deaths that followed inoculation drives in India, many villagers were fearful of vaccine shots, and many villagers who did fall ill were more inclined to visit faith healers peddling dubious “cures” than to seek help from a trained medical facility. Some locals have even been gripped by rumors that a menstruating woman receiving a vaccine will never menstruate again.

But according to Jadhav, as infections have climbed during the second wave, villagers have begun to recognize the seriousness of the pandemic. Resistance to vaccines, too, has eased with the second wave, Jadhav says—in part due to messages distributed by the village council via WhatsApp, as well as by a loudspeaker mounted on an auto-rickshaw, which went around the village debunking vaccine-related myths.

To cater to the rising infections, Saphale has now turned a few classrooms at a local school into quarantine centers with a total capacity of 50 beds—30 for men, 20 for women. When asked about the lower allocation for women, Jadhav simply says: “Some villagers don’t allow their women to leave home for quarantine.”

After the nationwide lockdowns were instituted last year, the rural economy of the country crashed, and unemployment remains high. Prior to COVID-19, Manjula Maskar, a 50-year-old resident of Saphale, would work as a domestic helper, cleaning homes and utensils for a living, earning a maximum of 500 INR ($6.75) per month. The COVID restrictions, however, have left Maskar struggling to put food on the table for her grandchildren.

“Even last year, we were sitting at home because of corona, and then, they came to disconnect our electricity connection. I had to draw loans from multiple people to pay the bill,” says Maskar.

“The government has helped us with nothing,” she says. “They should have helped us, transferred some money into our bank accounts, or helped with groceries. They did nothing. What do we do now? For how long do we stay hungry?”

Maskar’s daughter, 32-year-old Neema Hadal, too, has lost work as a domestic worker. Despite the surge, she still ventures out at times, working in fields, or picking up garbage, earning about 150 rupees ($2) for eight to 10 hours of work. A pile of sticks sits outside her house—to cook food on a brick stove, as she cannot afford to pay for cooking gas anymore.

Hadal has two children—a 14-year-old daughter and a 7-year-old son, who are also working to make ends meet. “They walk to the highway a few kilometers away and pluck blackberries from trees, Hadal says. “They sell it, and with the 10 to 20 rupees they earn, they buy something to eat.”

Maskar, the grandmother, suggests there were few other options. “Children are desperate for food. Everyone is desperate,” she says, “I’m not afraid of corona. They have driven the fear out of me.

“We’re going to die either way,” she adds, “whether we stay home or go out to fill our stomachs.”