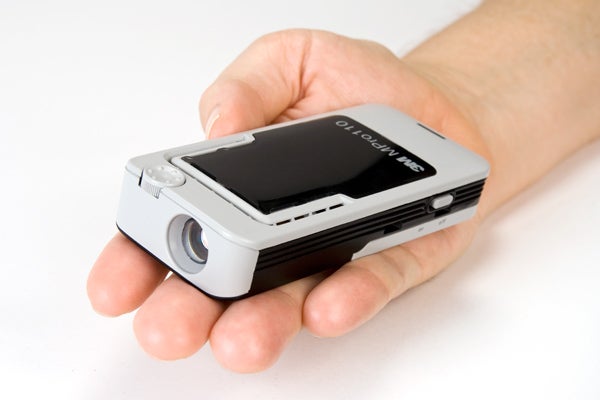 That’s projector, not protector. But geeks will rejoice nonetheless. The pocketsize projector has been the Holy Grail of gadgets for many years, and now we’ve got it. 3M sent us one of their first samples of their MPro110 mini projector a few weeks ago (but asked us to keep it on the down-low for a while). I immediately plugged it into a DVD player and watched Blackhawk Down on my desk—literally, on it, as I aimed it at my white Ikea desktop. (Ah, to be owned by a Swedish company.) It also worked on the wall, on a piece of 8.5-by-11-inch printer paper and on the back of my colleague, Doug.

3M had been planning to make a formal announcement in a few weeks, which is why we held off talking about it. But their German division got so begeistert about the new product that they just spit out their own announcement.

Images were discernable up to about 11 inches across, even under our bright fluorescent office lights. But they were definitely faded. And some movie scenes were downright indecipherable. The same went for photos. I’m pretty sure the prototype 3M loaned me at CES in January was brighter as I was able to demonstrate it during a presentation under bright lights to a few hundred people. But I’ll have to do more tests to know for sure. (Even if it’s less than ideal, kudos to 3M for making it work.)

In a dark room, it could project a big enough image to be the ultimate cheap-o home theater. The projector will sell for a mere $359. It doesn’t have a speaker, so you’ll have to get that separately. But really, how good could a microscopic speaker jammed into this thing sound, anyway?

The MPro110 is pretty basic looking on the outside—just a grey box. But it gets the job down. A VGA input lets you plug in a laptop; and the composite video jack will take output from a digital camera, PSP, iPod, iPhone, or most any handheld device (though video-out is still pretty rare on cellphones). A thumbwheel on the front allows you to focus.

So many companies have been promising pocket projectors with exotic technologies—from Microvision with its lasers and microscopic mirrors, to Texas Instrumentswith DLP chips (and lasers) to Light Blue Optics with holograms (no kidding). It’s funny that 3M just swooped in and grabbed the market while its competitors still haven’t gotten past trade-show demos. They made do with an LED lamp and little LCoS screens—a variation of the LCD tech that’s been in digital projectors since the early days.

The standalone projector goes on sale September 30. In a year or so, 3M hopes to squeeze it into cellphones.