Eat lunch at the desk? Your computer may be harboring more germs than a toilet 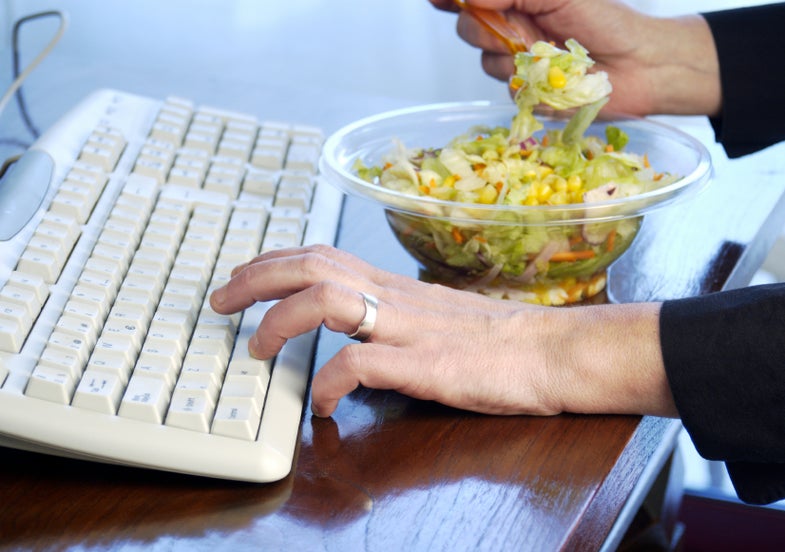 We’ve all heard of the five-second rule when having dropped food on the floor—if you pick it up before five seconds have passed, it’s safe to eat. In recent years, scientists have put that folk wisdom to the test and the results fell somewhere in the middle. If bacteria are present on the floor, researchers found that five seconds is plenty of time for it to attach to your food. However, most floors harbor very little bacteria, so unless you’re unlucky enough to drop your toast on a tiny patch of e. coli, you’ll probably be fine to eat it. If you were to drop that bread on your keyboard, though, that’s another story. You’d maybe want to back away slowly and reach for the nearest tongs.

People who eat lunch at their desks are usually commended for having a relentless work ethic. As it turns out, the downside to an uninterrupted day typing away is an accumulation of food bits between the keys. Those morsels are breeding grounds for bacteria, and as British researchers recently discovered, they can make your keyboard several times more polluted than a toilet seat. Doubtless your hands are a guilty party as well—the test results showed coliform bacteria in higher than normal levels (coliform comes from fecal matter).

The take away here is common sense, really. Wash your hands regularly and wipe down your phone and keyboard/mouse every now and again. And, get up for lunch! If not for a stretch and a change of scenery, than to protect yourself from getting sick and missing work.