Get Smart is loaded with new gadgets, but this wild take on the famous utility knife tops them all 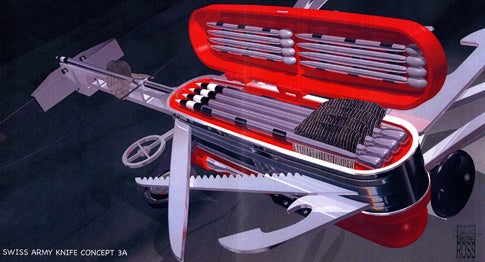 When we spoke with Peter Segal—director of the upcoming film Get Smart—for our Sci-Tech Summer Movie Guide, he knew straight off that he had to play up the technology in the comedic spy caper. “We knew getting into this that the gadgets are really important,” he says. He couldn’t tell us about all the tech tools in the film, but there’s a clever update of the infamous “cone of silence,” and the movie features exploding cuff links and dental floss, plus a tooth radio. But the coolest of the gadgets might be the film’s Swiss Army knife.

After doing some research into new technology trends, the filmmakers commissioned conceptual artist Christopher Ross to illustrate a few updates on the legendary tool. This super-knife includes a tiny flame-thrower, a blowgun that fires darts loaded with deadly venom, and a fold-away harpoon. That last feature seems to be Segal’s favorite. “A little cross-bow fires mini-harpoons connected to sixty feet of spider silk nanothread with the strength of half-inch steel cable,” he says. Honestly? Well, sort of. Segal says that the prototype blowgun and harpoon based on these sketches really did fire—but not spider silk.

The point, though, is that the sketches created an illusion of reality. “They actually made it all seem possible,” he says.

The makeshift harpoon gun stores its mini-harpoons inside the knife’s casing. 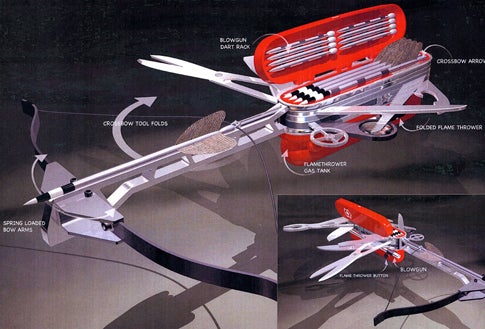 A spring-loaded bow launches the harpoons, which remain tethered to the knife via—what else?—spider silk nanothread as strong as steel cable. 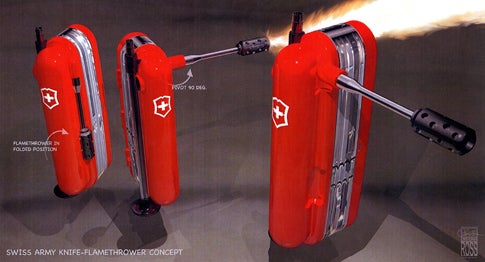 And if that’s not enough, the reverse side folds out into a tiny, lock-melting flamethrower.