Producing color with ultra-precise lasers, these screens are set to stun 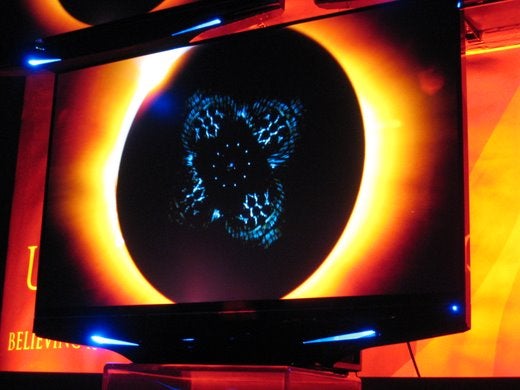 Those mad scientists at Mitsubishi have built the ultimate entertainment weapon—the laser TV! Lasers shooting out of a television screen isnt as scary as it may sound. But it does have one big benefit-color.

Lasers can be tuned to the exact wavelength of light you like—down to the nanometer. So TV makers can produce the ideal shades of red, green, and blue to produce the best colors possibly. Mitsubishi claims this allows them to reproduce about 80 percent of all the colors humans can see—versus about 40 percent for other TVs.

Is all that true? I cant say for sure, but I know that colors were stunning. And maybe I just had too many cocktails at the launch party, but I think I saw colors that I hadnt seen before on a TV.

In a clip from Moulin Rouge, for example, the yellows in the dancers dresses and in their makeup were virtually luminescent. Same for the falling yellow leaves in the great girl-on-girl battle from Hero. In Star Wars final encounter between Anakin and Obi Wan, the light sabers glowed a fluorescent blue that I dont think I saw in the theater.

And then theres the reds. Mitsubishi was tight-lipped about every single technical detail of the TV, but Im pretty sure they are proudest of the reds. Almost every scene they showed on the set was saturated in crimson—be it the lava planet from Star Wars, the all-red sequence from Hero or the rouge in Moulin. And thats significant, because red has generally been the hardest color for TVs to produce properly.

The biggest mystery is how Mitsubishi produced such laser-sharp images without the speckly artifacts that are supposed to be inherent to laser projection. Did they put some special foo in the screen to kill the speckle? Are they doing something unique with the lenses. Well have to wait to find out.

But in most respects, the TV is probably the same as any other Mitsubishi rear-projection TV. Instead of using a projector bulb or LEDs, it uses lasers to light the Texan Instruments DLP chip that reflects images out to the screen.

Mitsubishi says you can buy the new set by the end of the year. They arent revealing the cost, but a marketing guy told me their 50-inch model would compete with 65-inch LCD TVs, which run around $6000. Will folks pay more money for a fatter TV, just for the color? I think the video fanatics will—and there are a lot of them. Me, I think Ill buy a bright red car instead.—Sean Captain