A Head of its Time 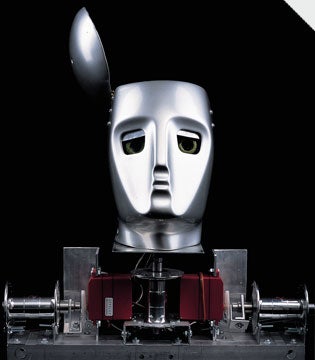 HEADROOM: “I didn’t want it with wavy hair and perfect, symmetric eyes,” says Patrick Rael of his creation. “I wanted it to look human–but not too human.”

If you’re like Patrick Rael, you not only dream of a world populated by androids, you dream of building them yourself. Rael can’t tell you how to do that, but if you have a few hundred bucks and a couple of Web cams, he can teach you to build R. Max–a robot Web cam head that blinks, pivots, and gazes toward that future of your dreams.

Rael built R. Max (or “Robot Maximilian”) in three months for $600 (not including the PC it hooks up to) with over-the-counter parts. He says that a resourceful hobbyist could build it for even less, following the instructions on his Web site.

The hardest part of building R. Max may be locating a suitable head. Rael found the one at right in a mannequin shop for $60 and coated it with chrome-colored spray paint.

Once you’ve got an appropriate head, you’ll need to drill eye openings and cut open the cranium. Then the Web cams are mounted on brackets that pivot (so the eyes can rotate) and are bolted to the inside of R. Max’s temples.

The next step is building what Rael grandly calls the cranium chassis, though others might call it a little metal box made from thin-sheet aluminum. Rael mounted the servos that control the eyes and eyelids on it. He then bolted the circuit board that links the servos and the computer to the right of the cranium chassis. Power cables and a data connector run through R. Max’s base, which consists of a $6 brass plant holder and the hub of a bicycle wheel.

To Rael, a computer programmer, R. Max isn’t just a tin-man visage with Web cam innards. He considers it a first step in an effort to build a life-size, sentient android. He works on nights and weekends, and while he labors, he says, “I want to share what I’ve learned with other people. I want androids to proliferate.”