Kindle DX: To Buy or Not To Buy?

The newest Kindle isn't right for everyone 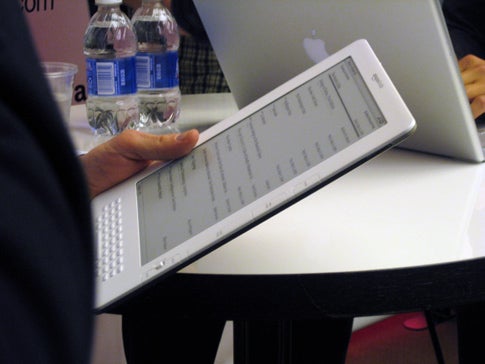 Today, Amazon announced a new Kindle e-reader that has a bigger screen — 9.7 inches diagonally — and a bigger price tag: 489 smackeroos. So should you fork out $130 more than the last Kindle for the new version? We can’t say for sure until we get to play with it for a while, but here’s a preliminary guide based on the specs and our quick demo at today’s press conference.

Who Will Want It

Students: Textbooks can weigh five-plus pounds and cost 80-plus dollars. So backpack-burdened students are the obvious first customers for a big-screen e-reader that can hold hundreds of textbooks and display their diagrams and charts in full. The Kindle DX isn’t the first large-screen e-reader (see the options from iRex) but Amazon’s clout gives it an advantage, letting it offer textbooks from many different publishers. Amazon has already announced deals with Pearson, Cengage Learning, and Wiley, who together account for 60 percent of the U.S. textbook market. Although prices for the upcoming digital textbooks haven’t been announced, I expect that they’ll be lower than the printed version, just as with Amazon’s other e-books.

News junkies: the New York Times, the Washington Post, and the Boston Globe will all offer Kindle DXs at a discounted price in a trial of digital subscriptions. Unfortunately, it seems this summer’s trial will happen only in areas where there’s currently no paper delivery. (Looks like the rest of us will have to wait, which is too bad for me — I’d gladly sign on, because even though I can get the paper delivered to my apartment, someone always steals the darn thing before I get outside.) Right now the digital newspapers’ format is simple, not a copy of the paper version’s layout, just as on previous Kindles — although maybe the bigger screen will prompt publishers to think about new ways of presenting articles.

Owners of printers: Businesspeople, scientists, and the rest of us are always printing out 8 1/2-by-11 documents, whether they’re corporate reports, journal articles, or recipes. A screen that’s two and a half times the size of the original Kindle’s gets much closer to the size of an actual piece of paper, so you don’t have to zoom or scroll to see all the information — everything looks exactly like the printouts we’re used to. The best part: The Kindle DX can read all your PDF documents instantly, without you having to go through the complicated conversion process that the current Kindles require.

Scribblers: The DX, like other Kindles, lets you highlight text and type in notes using a small QWERTY keyboard. That works pretty well, but it’s not for everyone. People who like to scrawl notes or scribble in the margins might want to opt for an e-reader that, like a tablet PC, lets you write with a stylus. And some avid readers just don’t like the idea of buttons on their book. (iRex offers stylus-friendly models; the touchscreen Sony Reader lets you turn pages with a swipe, although you type by pressing letters on its screen instead of writing by hand.)

The risk-averse: You never know what’s coming down the line. Will Amazon introduce a new model with new features, like faster page turns, color, a touchscreen? Will Plastic Logic finally come out with its large, touchscreen, much-hyped e-reader — and will it offer book deals to rival Amazon’s? Or will some even better gadget or screen technology come along?

Who Could Go Either Way

Bookworms: For people who simply love to read — and to download new books instantly wherever they are — it’s a toss-up between the regular Kindle and the Kindle DX. It comes down to what size screen you want to tuck in your bag, and what size screen you prefer to read on. If you like a lot of books and magazines with illustrations, photos, or graphs, you might want to opt for the DX.