This is not the future we signed up for! 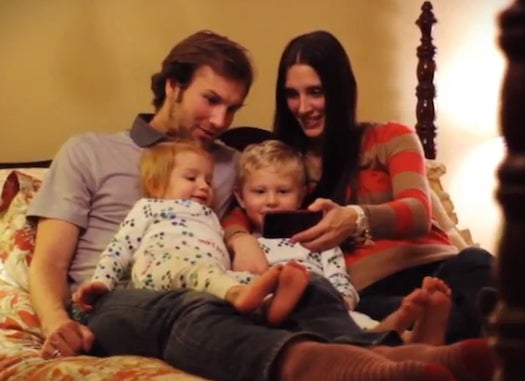 “Gee,” the hyper-intelligent children of this Brave New World of ours must often think, “I sure wish Mommy and Daddy had a smartphone-based way of reading me bed-time stories! Perhaps in some way that utilized QR codes?” Well, parents, that future you did not expect or ask for is here.

Smart PJ’s (PATENT PENDING) bills itself as the company making the “worlds [sic] first and only interactive pajamas,” which admittedly is an incredibly niche thing to be the first at. Here’s how it works: the pajamas are covered in QR-code-inspired dot patterns (!) that are scannable through custom-made apps. Scanning different parts of the pajamas with different apps (there are two right now) brings up stories, animal pictures, or thoughts of the dystopian, child-ruled apocalypse we are certainly hurtling toward.

The founder/inventor, Juan Murdoch, a realtor, says he was inspired by QR codes that are used to sell houses, and immediately got to work building his own version (“It just came like a lightning bolt in my head: kid’s pajamas”). His children, a 6- and an 8-year-old, love theirs, he says. But he’s not too worried about the next generation growing up screen-nourished: “That’s what some people said out there… but it’s just like rock ‘n’ roll.” Yes, interactive onesies are almost certainly the least rock ‘n’ roll thing out there, but he meant that “kids are gonna do what kids are gonna do,” and at least this way parents are spending time with their children.

So depending on how you feel about making everything interactive, these pajamas are either a) an awesome way to game our gadget-hungry progeny, or b) something people will ironically wear adult versions of 20 years from now when they’re throwing 2013-themed parties. Either way, you can purchase some for your offspring for $25 here.