The First Elevated-Pin Braille Smartphone Gets A Prototype

Incoming text gets translated into braille through little pins, constantly moving up and down to convey what's happening in the phone. 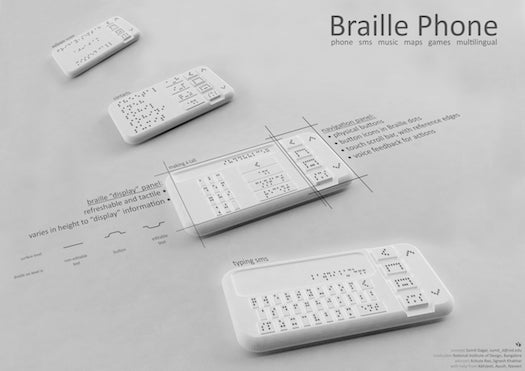 With smartphone interaction mostly relying on sight, since there’s no tactile difference to what’s on the screen, some blind people have turned to apps to make up the difference. These apps can do some pretty impressive things, like determine the denomination of currency or read text out loud, rendering braille unnecessary for some tasks. But those were workarounds, to make up for the inability to create an actual braille interface. For about three years, a team of inventors in India have been working on a smartphone that can turn apps and text into braille. Now they’ve got a prototype.

The phone, from the Centre for Innovation Incubation and Entrepreneurship in Ahmedabad, translates text into braille by elevating pins: after the text or email or webpage comes in, the pins form a braille version that the user can touch to read. It’s not clear what operating system the phone will run on–Android? Something else?–but according to the Times Of India, it’ll feature “all other elements” that your more traditional smartphone would have.