Video: Other Hand Busy? Poke Your Smartphone With This Giant Nose-Extender Stylus

There are times when you can’t operate your phone–when you’re wearing gloves, when your hands are wet, or when you... 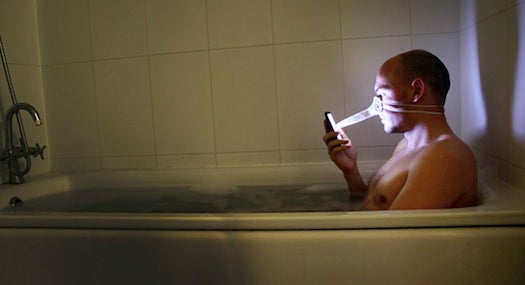 There are times when you can’t operate your phone–when you’re wearing gloves, when your hands are wet, or when you don’t have hands. This DIY nose-stylus solves that problem, and only requires that you have a head to strap it around. And a ton of self-confidence.

Inventor/madman Dominic Wilcox created the Finger-Nose stylus specifically for use in the bath. It’s basically a plaster nose with a capacitive stylus embedded inside, protruding slightly from the tip of the plaster. (You can’t just use the plaster itself; capacitive touchscreens, used in just about every modern smartphone, rely on an electrical charge from either naked human skin or specially-designed styli.) Curiously, the plaster he used has embedded fibers to make it look slightly hairy, though there are still several steps he would need to take before anyone believes this giant white nose with highly visible face-straps is an organic part of one’s face.

Apparently it takes a little practice to use, but Wilcox sees lots of uses beyond the bath–in cold weather, or just as an extra digit for multitasking (maybe it’d be useful for the multitasking beast that is the Motorola Xoom?). The Finger-Nose Stylus is currently just a DIY project, but we’re sure you can recreate it if you really want to.

[Variations on Normal via MobileCrunch]