This week in “solutions to problems we didn’t know we had,” software engineers at NEC have developed a fruit recognition... 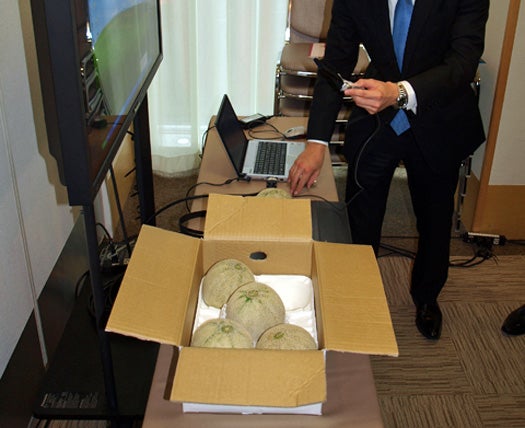 This week in “solutions to problems we didn’t know we had,” software engineers at NEC have developed a fruit recognition system. That’s right: snap a quick cell phone pic of that papaya in your hand and the system will provide you with everything you want to know about it all the way back to where it was picked.

Digital fingerprint and face recognition are two of NEC’s strong suits, and it turns out the physical characteristics of fruit are viable identifiers just like the tiny peaks and valleys of your fingerprints. The idea here is that fruit and veggies would be photographed and given an “identity” as they come out of the ground/off the vine/out of the tree, and that ID will be stored in a database. End consumers and distributors can then trace a piece of produce back to its origins by snapping a simple cellphone pic. Tested on 1,800 Andes melons, the system’s error rate was just one in one million.

For distributors and markets the system spells better, faster, and more accurate tracking. But what does this mean for the average consumer? It could create greater awareness of how far most of our food travels to get to us. Or it could just freak consumers out when they realize just how many days often stand between them and freshly picked produce. In any case, the technology isn’t quite ready for market; NEC plans to make the system commercially available in two or three years, or whenever a soft squeeze indicates it’s ready.