Lenovo and Swedish eye-control company Tobii have teamed up for a laptop prototype that uses eye-tracking tech to trigger certain... 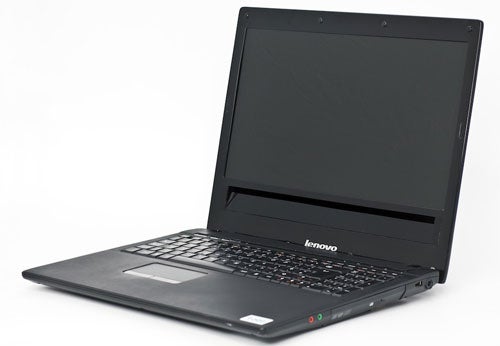 Lenovo and Swedish eye-control company Tobii have teamed up for a laptop prototype that uses eye-tracking tech to trigger certain actions on the computer. We’ve seen this idea before with smartphones, but the laptop’s bigger size and increased power makes it much more suitable–even useful, if Engadget’s hands-on is any indication.

Shown off at CeBIT today, the prototype is still a long ways off from actual production, if it gets there at all–Tobii estimates two years at the earliest, both for hardware and software considerations. But according to reports, it works flawlessly, able to recognize even very small movements with impressive accuracy. The prototype uses a sensor bar, rather than webcams like Microsoft’s motion-sensing Kinect, which is implemented as a thick bar at the bottom of the laptop’s screen. Tobii notes that the sensor has to be of a certain size to work properly, but that it could eventually be about the same thickness as a laptop’s natural bezel, which would obviously be ideal.

The demo was running on Windows 7, and had a few interesting ideas as to how to use the new input method. You can’t just have the cursor follow your eyes–it would be incredibly distracting, with the cursor flitting all over the place, and would lead to a lot of accidental movement and reaction triggering. Instead, there are specific places where the eye-tracking can be used, and many are triggered with a button press to avoid inadvertent selection: Look to the bottom of the screen to bring up the taskbar, or to the left of the screen to bring up a custom-made sidebar of recently-used media. It can also be used in concert with a Mac Expose-like app preview window–just look at the app you want, tap a key, and the app at which you’re gazing is selected.

If we’ve learned anything from the Kinect, it’s that this kind of sensing is a natural fit for games, and Lenovo put together a simple (though apparently very responsive) game in which you can shoot asteroids by looking at them (a superpower we’ve all wanted at some point). Of course, any kind of development is a ways off–hopefully we can see some implementation of this tech in computers soon, so we can see what it can really do.