The Energy Harvesting Gadgetry Of A Ducati-Beating Superbike

In November 2009, after spending three months recovering from a broken pelvis, Chris Yates, a motorcycle racer, engineer, and defense... 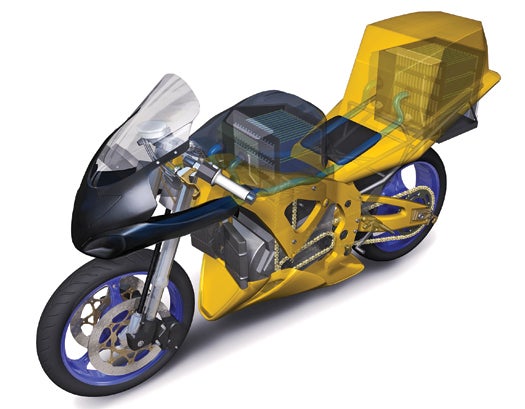 In November 2009, after spending three months recovering from a broken pelvis, Chris Yates, a motorcycle racer, engineer, and defense contractor, began staging his reentry into racing. This time, he chose a new niche, where his training as an engineer would be a particular asset: electric motorcycles.

He started by converting a gaspowered Suzuki GSX-R600 to run on a 194 horsepower electric motor that was built to power driverless U.S. Army tanks. Lithium-polymer batteries, 180 pounds of them, supply the charge. But to pack in even more power without adding extra battery weight, he designed a regenerative braking system that pulls otherwise wasted energy from both wheels to give the batteries a periodic boost. Yates and his team also custom-designed software that carefully manages overall energy usage. All that engineering was worth it.

In January, during a race against gas-powered Ducatis, KTMs and Hondas, Yates’s bike placed second, setting the fastest lap time (one minute, 39 seconds), and clocking a top speed of 158 mph. Here’s how. 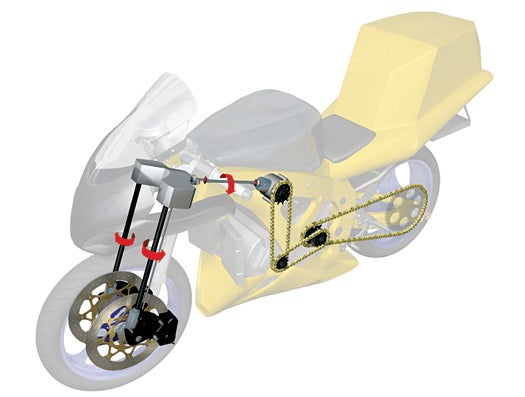 A Peek Inside The Superbike

Kinetic energy recovery systems (KERS) harvest energy from decelerating wheels and then convert it to electricity. On motorcycles, KERS is usually installed only on the rear wheel. But when a motorcycle brakes, most of the weight shifts to the front wheel, which means if you can pull it off, that’s the place to recover energy.

Yates managed to do so by connecting counter-rotating shafts to gears near the front fork and linking another shaft to the electric motor with a chain. When he squeezes the KERS lever on his handlebars, the motorcycle slows not by physically applying the brakes but by using the momentum of the wheel to turn the electric motor, thereby generating electricity.

An onboard computer collects data from gyroscopes, sensors and GPS; it then calculates the bike’s location, the distance traveled and the speed of each wheel, and limits power usage accordingly.