Razer Switchblade Gaming Netbook Changes Its Keyboard for Every Game 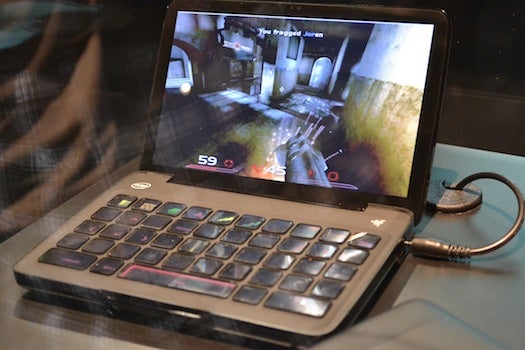 From the annals of goofy might-or-might-not-happen CES concepts comes the Razer Switchblade, a 7-inch gaming netbook from venerable gaming accessory maker Razer. A 7-inch screen is a distinctly small size for a Windows 7 computer, and for gaming it seems particularly problematic. Razer has an interesting way of dealing with the problem of an undersized keyboard: Pop OLED screens under every single one, so you can totally change the configuration of the keyboard at will.

The Switchblade is sort of a conceptual combination of the Toshiba Libretto (with its dual 7-inch screens) and the Optimus Prime keyboard (the first keyboard to push the individual-OLED idea). The Switchblade’s keyboard is of standard size for 7-inch netbooks, which means fairly small keys (and not a whole lot of them). To compensate, Razer used keys that are actually tiny OLED screens, which means you can put any image you want on them. Want the QWERTY to actually be ACBDEF? Go for it, you nonconformist, you. Or, more practically, how about assigning a Gmail logo to a key, and having that open a bookmarked Gmail page?

The possibilities for gaming are pretty obvious: You can map any shortcut to any key, and give it a nice logo to keep track. You can cut the keys you don’t use, or change the configuration so it’s easier to use on such a small keyboard. Each individual game has a different control scheme, so why have one key layout for every game?

The Switchblade may never actually hit stores. The tiny screen size and relatively weak Atom processor wouldn’t be nearly powerful enough to run the kinds of games hardcore gamers–the ones who would be interested in this thing in the first place–want to play. Battery life could well be atrocious, and the price would almost certainly be astronomical. But It’s such a cool idea that we kind of hope it gets picked up by other, more practical gadgets (like, say, an Alienware gaming laptop).