Leave it to Japanese designers to turn technology into something both stylish and functional — and then keep it all... 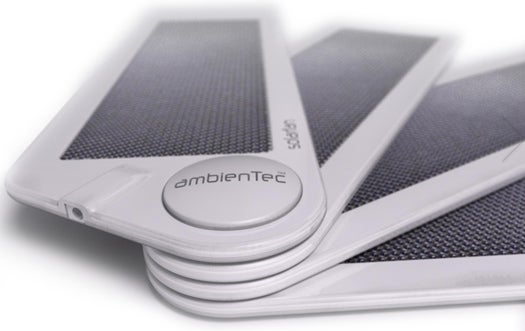 Leave it to Japanese designers to turn technology into something both stylish and functional — and then keep it all to themselves. The SolarFold and SolarFan portable solar chargers unfold into surface-area-utilizing solar collectors when needed, supplying enough power to make a three-minute iPhone call after just ten minutes in the sun.

Even better, they’re available immediately — in Japan anyhow. The aptly named SolarFold packs into a tight, flat bundle about the size of a Sony PSP, but deploys like a folding screen to maximize solar exposure. But the even-cooler and equally well-named SolarFan fans out like, you know, a fan — and it comes with a handy little tripod so you can adjust the angle of your ersatz solar array to suit your location and the time of day.

Made by AmbienTec, the chargers run about $250 each and power just about anything that can juice up via USB. The devices haven’t hit U.S. stores yet, but AmbienTec will happily sell you one directly.