With Avatar, the highest-grossing movie of all time, and the World Cup, the most-watched TV broadcast, both in 3-D, it... 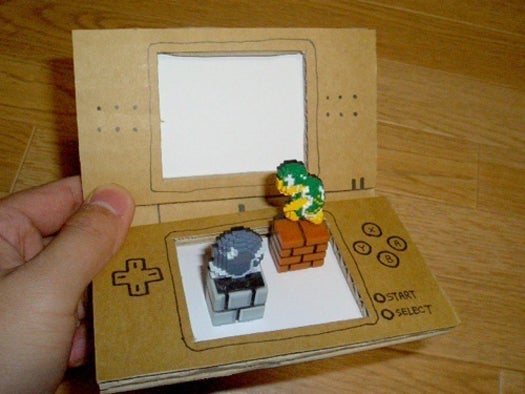 With Avatar, the highest-grossing movie of all time, and the World Cup, the most-watched TV broadcast, both in 3-D, it was only a matter of time until Nintendo, the most popular video game maker in the world, jumped on the three-dimensional bandwagon. And last night, Nintendo confirmed as much, announcing that a 3-D DS will soon hit the market.

So far, the details are slim, with the press release only noting that the 3-D DS will land on shelves sometimes between this April and next March, that it will play older, 2-D DS games, and that it won’t require 3-D glasses.

How the device will produce a 3-D effect without glasses has set off a wave of speculation. Initial theories focus on motion sensing, like in the iPhone game WordFu, or head tracking as utilized by the extant DS game 3-D Hidden Picture — see video below.

Either way, with Nintendo promising to unveil the new device at this year’s E3, we will only have to wait a couple more months before we find out.