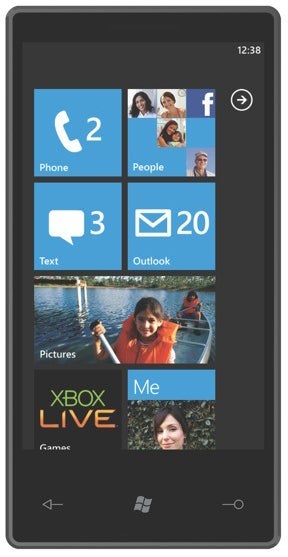 Gadget lovers are nothing if not fickle, always ditching their older tech for pretty young things. And recently, all the attention on the iPhone and Google’s Android OS has made Microsoft seem a bit like Norma Desmond, wandering around the ruins of the Redmond campus muttering “I AM big, it was the platforms that got small.”

But now, with the revelation of Windows Phone Series 7, Microsoft is once again ready for its closeup.

Microsoft built this new smartphone OS from the ground up, with the Google and Apple influences plain to see. The entire look and feel of the system has changed radically from the older Windows Mobile OS, which replicated the desktop experience on a small device. Indeed, even the code is brand new, replacing the older, program-centric focus of Windows with a more relevant Internet app and social networking focus.

As can be seen from the home screen shot to the left, Phone Series 7 integrates Outlook email, Facebook, X-Box Live and Zune music functions with the regular phone duties of calling and texting.

Beyond the OS, Microsoft borrowed more than its aesthetics from Apple and Google. The Gates Crew will also dictate very strict hardware requirements for the OS, ensuring that Phone Series 7 devices appear and function similarly, regardless of which company makes the phone or which carrier supports it.

Ultimately, that diversity may provide Microsoft with the leg up it needs to best Google and Apple. Both of those companies are notoriously stingy about what companies can distribute and support their products, which limits the iPhone and Droid’s convenience and range of software. Microsoft’s business polyamory, on the other hand, will allow for easier integration of cheaper and more creative third party products.

Will this “mPhone” allow Richmond to project its past desktop OS dominance into the future world of mobile computing? Or is Gates Co. once again playing catch up with its younger, more dynamic southern rivals? With the first Phone Series 7 devices slated to hit the shelves by holiday time this year, it looks like we only have to wait 9 months to find out.