Clouds Of Water Detected Outside The Solar System

In the vicinity of the coldest known object out there 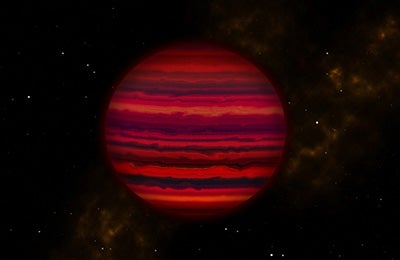 Astronomers have located water clouds around the coldest-known object outside the solar system, a brown dwarf 7.2 light-years from Earth.

Brown dwarves are stars that never got off the ground, too small to fuel heat- and light-making nuclear fusion. Discovered in 2014, WISE 0855 is the chilliest body that astronomers have been able to detect; it’s nearly as frigid as our own neighboring gas giant planets. “Its extremely low temperature makes it the first object after Earth, Mars, Jupiter and Saturn likely to host water clouds in its visible atmosphere,” wrote the team, who published their findings in May in Astrophysical Journal Letters.

They now have robust evidence of these clouds. WISE 0855 is too cold and faint for the normal technique used to study brown dwarves, infrared spectroscopy. Instead, the team used the Gemini North telescope in Hawaii to detect light in a fine window of wavelengths that has also been observed coming from Jupiter.

“Our spectrum shows that WISE 0855 is dominated by water vapor and clouds, with an overall appearance that is strikingly similar to Jupiter,” coauthor Andrew Skemer, of the University of California, Santa Cruz, said in a statement. This information will give astronomers a jumping-off point to learn more about what’s happening in WISE 0855.