Who wants to swim with robot dolphins? More people than you may think.

It’s not hard to convince people to want to hang out with a robot dolphin instead of the real thing. 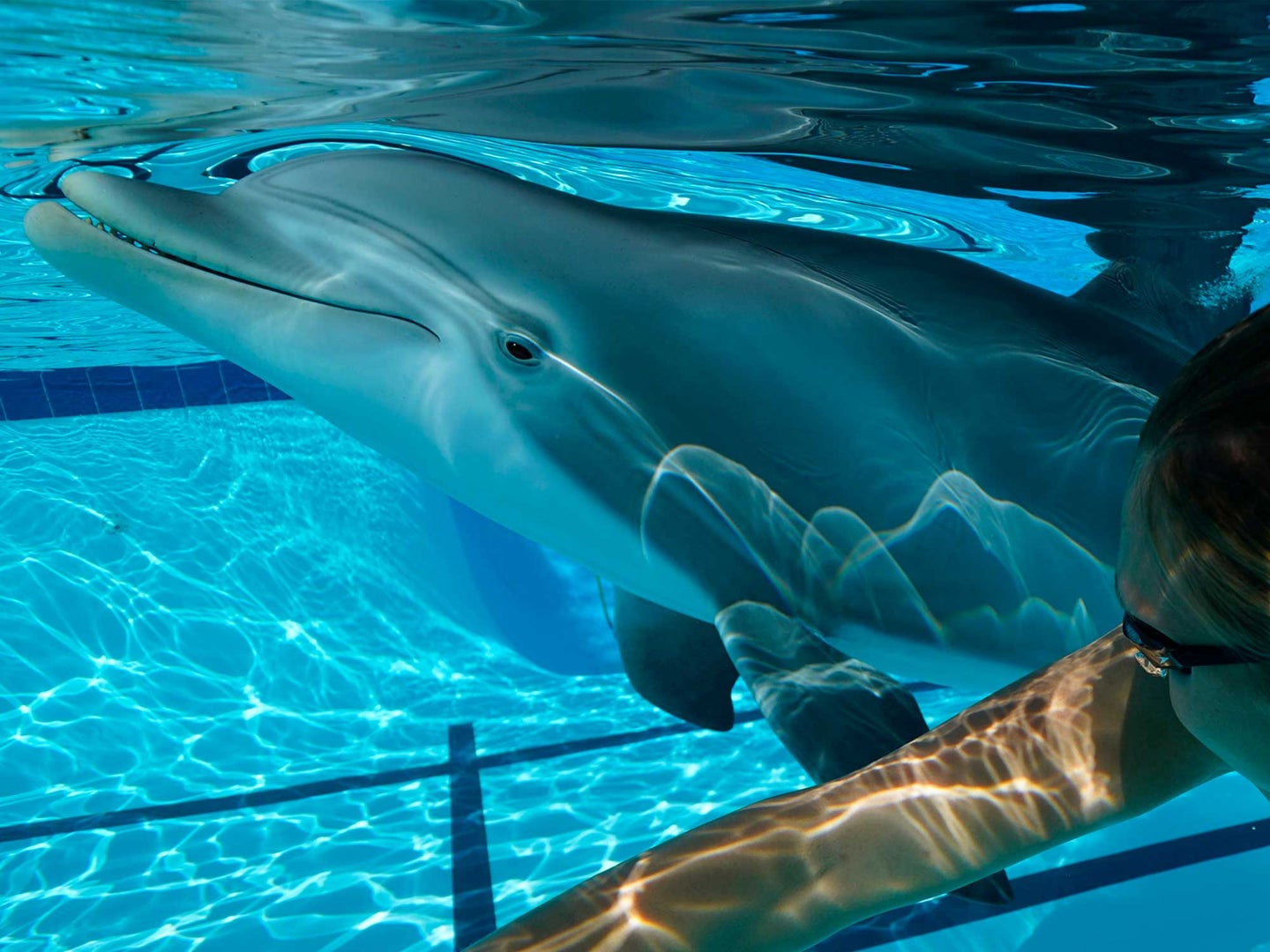 In San Jose, California, kindergarteners are sitting at the edge of an outdoor pool when a sleek two-meter-long mass breaches in front of them, water dripping off its smooth gray skin. It stops and enthusiastically nods, splashing the children as their jaws drop in awe. A thin, barely perceptible cord running from its navel to a control panel nearby is the only obvious sign that this is no dolphin—it’s a robot.

Delle, a prototype animatronic dolphin currently undergoing testing in San Jose, became a media sensation in 2020 because of its hyperrealistic features. Created by Edge Innovations—the Hollywood special effects company behind the killer whale in Free Willy, the snake in Anaconda, and the dolphin in Flipper—Delle was designed to revolutionize traditional captive animal demonstrations. The project began several years ago when three Chinese aquariums approached the company looking to cut costs by using robots in lieu of live animals, but the effort has proved appealing to those concerned with the welfare of cetaceans in captivity.

Roger Holzberg, the user experience designer behind Delle, says his team hopes to use robots to preserve the allure and education of getting up close and personal with a dolphin—including petting and swimming—without risking harm to an animal. In captivity, cetaceans are prone to depression, skin problems, and have a lower life expectancy.

But Delle’s existence raises a question: if given the choice, would you pick to see a fake dolphin instead of a real one?

A new study by David Fennell, an ecotourism researcher at Brock University in Ontario, shows that while people may initially find the prospect of a robot less appealing, they can quickly shift their perspective.

For his paper, which is part philosophical exploration and part survey, Fennell asked 15 students who were part of his tourism and animal ethics class if they would prefer to swim with an animatronic dolphin or a live one. Even among this small group of well-informed people, 10 of the students said that they’d prefer the live dolphin encounter because of the allure of connecting with a wild animal. Fennell says that like his students, many people are compelled to interact with live dolphins despite understanding the harm done to animals in captivity.

When people see others enjoying captive animal encounters, he says, that is a normative experience—it makes them more prone to thinking the activity is acceptable in spite of their own reservations.

But after showing his students both the documentary Lolita: Slave to Entertainment, which documents the life of Lolita, a captive killer whale at the Miami Seaquarium in Florida, and a promotional video for Delle made by Edge Innovations, the majority of the students changed their minds.

“It’s quite telling that nine of the 10 had made that radical change to move from the live experience to the animatronic experience,” Fennell says. “That’s the power of education again, isn’t it?”

Interestingly, rather than just accepting the robotic dolphin as a cybernetic substitute, many of Fennell’s students decided that seeing the animatronic dolphin would be a unique experience in its own right.

Carl Cater, an expert in adventure and ecotourism at Swansea University in Wales who was not involved with the study, says replacing live dolphins in captivity with robots is a net positive. He does worry, however, that aquarium visitors might get the false impression that wild dolphins are as approachable and friendly as the replicas. Holzberg says that educational programming from aquariums must be clear in explaining that wild dolphins should be left alone.

To Fennell, the pending spread of robotic stand-ins to aquariums around the world is all part of redefining our relationship with wildlife. To be more ethical tourists, he says, people should embrace this futuristic form of animal encounter.