The Supreme Court curbed the EPA’s ability to restrict emissions, so states are looking to enshrine rights to “healthful environments” in their constitutions. 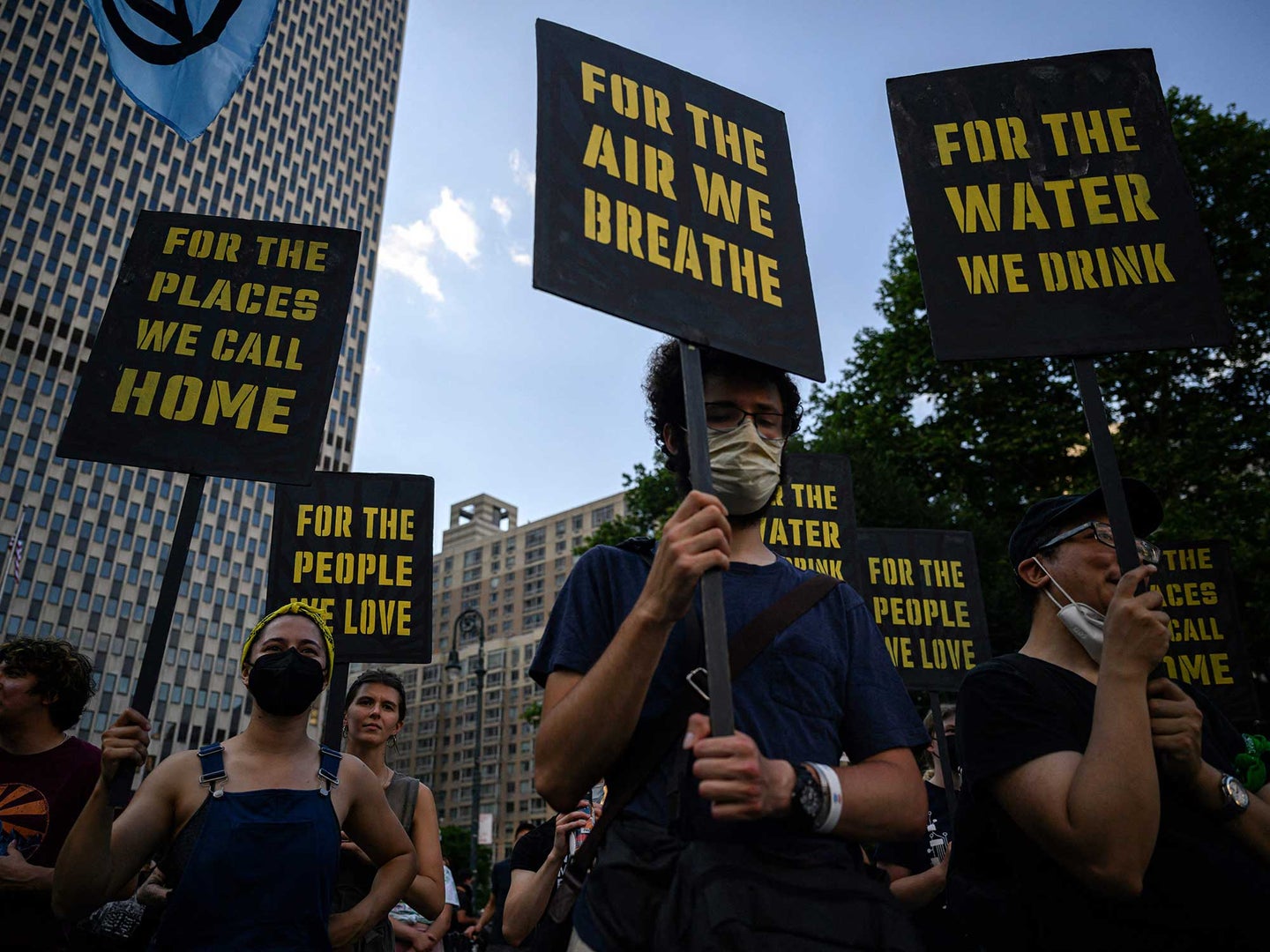 According to locals, two different types of odors emanate from the 366-acre High Acres Landfill, which sits just outside Rochester, New York.

“There’s the gas odors, and then there’s the garbage odors coming from when they open the landfill and are actually dumping, or the trains unloading from New York City,” Gary McNeil told City, a local news site. “That gets a little worse in the summer, you’ll smell a much more pungent waste odor.”

McNeil heads Fresh Air for the Eastside, a nonprofit that has been organizing against the landfill, which residents say emits foul, noxious odors. The organization has sued the town in which the landfill resides as well as the waste management company that runs it.

But in January 2022, the group took a new approach. It filed a new, parallel lawsuit, claiming the site violated residents’ newly enshrined constitutional right to “clean air and a healthy environment.”

Just two months earlier, after years of advocacy, New Yorkers had voted two-to-one in favor of a ballot measure to add a green amendment to the state constitution, making New York the third state to do so. (Pennsylvania and Montana passed green amendments through their own political processes in 1971 and 1972, respectively).

Advocates say these amendments can be a powerful tool in advancing environmental justice.

”The green amendment necessarily refocuses the government,” said Maya K. van Rossum, an environmental lawyer and founder of Green Amendments For the Generations. “It’s no longer [a question of] accepting pollution as a foregone conclusion and deciding what permit to issue for it. Government actually has to refocus its efforts to ensure they’re not infringing on this constitutional right.”

In June, the U.S. Supreme Court issued a ruling that limits the Environmental Protection Agency’s ability to restrict emissions. The court’s decision drives home the urgency of such constitutional protection, van Rossum said.

Organizers and lawmakers are currently advancing green amendments in at least a dozen states across the U.S., including New Mexico, Maine, Hawaii, Washington, New Jersey, Delaware and Maryland.

New Mexico State Sen. Antoinette Sedillo Lopez, who introduced a resolution to adopt a green amendment in her state, agrees with van Rossum. “With the recent West Virginia v EPA decision I’m worried about the Supreme Court gutting our federal agencies,” she said. “I think it’s important that the state step up, and this is one of the tools that we can use.”

In order to be most effective, van Rossum said legal rights to a healthy environment need to be included in states’ Bills of Rights. “If you have an amendment that says the people have a right to clean water and clean air, as determined by the State General Assembly, you haven’t changed anything. You just put in place pretty language,” she said. Inclusion in the Bill of Rights would make clean air and a healthy environment an inalienable right, like freedom of speech. (These amendments do not include specific language defining or quantifying what it means for air to be clean or an environment to be healthy.)

The push to secure the constitutional right to a healthy environment comes amid a growing awareness that pollution and climate change do not affect all communities equally. Black, Hispanic and Native communities are exposed to higher levels of air pollution than the general population and suffer higher rates of childhood asthma. They are also more likely to live in areas more vulnerable to extreme heat and flooding.

In New Mexico, mining, fracking and drilling operations, such as those taking place in the Permian Basin, are typically sited near communities of color, Sedillo Lopez said. “I actually had a colleague say, ‘Write off the Permian Basin, just call it a sacrifice zone and walk away.’ Well, the [communities near the] Permian Basin are majority Hispanic,” she said, adding that another nearby community facing similar issues is majority Native American.

Sedillo Lopez said a green amendment would obligate the state legislature to assess the potential health and environmental impact of certain activities—for example, installing a fracking pipeline—before they begin. “The state, before granting the permits for a pipeline, would have to examine, is this pipeline strong enough?” she said. “Where is it going through? Is it near schools? Is it near farms? What is the impact if this were to leak? What [would be] the impact if this didn’t just leak, it exploded?”

In January 2020, a fracking pipeline burst near Carlsbad, New Mexico, contaminating the water on at least one family farm, sickening members of the family and their animals. Sedillo Lopez said a green amendment might have prevented the pipeline from being installed near the family’s water source in the first place.

Like green amendments around the country, New Mexico’s faces a difficult path forward. Sedillo Lopez first introduced the legislation in 2021, and opponents have voted it down twice.

New Mexico’s prominent oil and gas industry poses a challenge to the proposed amendment, said Sedillo Lopez. “Unfortunately, oil and gas revenue is very important to the state. And that’s the headwind we’re facing,” she said, adding that the power of such special interests underscores the importance of transitioning to wind, solar and other cleaner sources of energy and employing people in those fields.

Sedillo Lopez said she expects the legislation to go before the state legislature again when the next session starts in January.

As in New Mexico, environmental justice advocates in Maryland have been pushing for a green amendment of their own for years. In April, opponents of the proposed Environmental Human Rights Amendment prevented the legislation from advancing beyond committee for the fourth time, arguing that broad language used in the amendment would “unleash a flood of litigation.”

Del. Kumar Barve, the chair of Maryland’s Environment and Transportation Committee explained his misgivings about the amendment to Maryland Matters, a local news site.

“It’s better to have environmental regulations and enforcement handled by the executive and legislative branches of government, rather than the court system and juries decide these things because these are complex issues that are not absolutist in their nature,” Barve said.

Supporters of the legislation, like Shashawnda Campbell of the South Baltimore Community Land Trust, say they are undeterred. “For people, especially communities of low income and of color, [a green amendment] is a way to say ‘you’re not crazy’,” Campbell said. “Your right to clean air is just a basic, bare minimum.”

Like New Mexico, Maryland’s proposed green amendment could be brought before the state legislature again when the next legislative session begins in January.

New Jersey’s proposed green amendment has faced similar challenges, with opponents there also saying such legislation could open companies up to frivolous litigation.

There, advocates like Kim Gaddy of Clean Water Action are pushing to get enough legislative support to put a green amendment on the ballot in the state’s 2023 legislative elections.

“When you think about how we want future generations to be protected, we can’t have environmental sacrifice zones where, just because it’s Newark or a community that is low-income or people of color, we can’t protect them,” Gaddy said. “We need a green amendment in the state of New Jersey to bring some relief to these communities who have suffered for too long.”

Montana and Pennsylvania show what is possible when citizens are given inalienable rights to a safe and healthy environment, van Rossum said, adding that those states have not seen a deluge of frivolous lawsuits. In those states, the law has been used, for example, to limit mining operations and crack down on fracking. Youth climate activists are currently suing the state of Montana, arguing that the state’s energy policy, which relies on fossil fuel exploration, infringes on their constitutional right to a clean and healthful environment. The trial of Held v. State of Montana is scheduled to begin in February of next year.

(According to van Rossum, advocates in Montana and Pennsylvania have only begun to effectively use green amendments to address environmental injustice in the last decade or so.)

Enacting a green amendment is only a first step to ensuring citizens actually enjoy their newly enshrined rights, supporters say. “We can look at the right to free speech and freedom of religion, and we will still see abuses,” said van Rossum. “But because the constitutional right is there, we have a check on that misuse of power.”