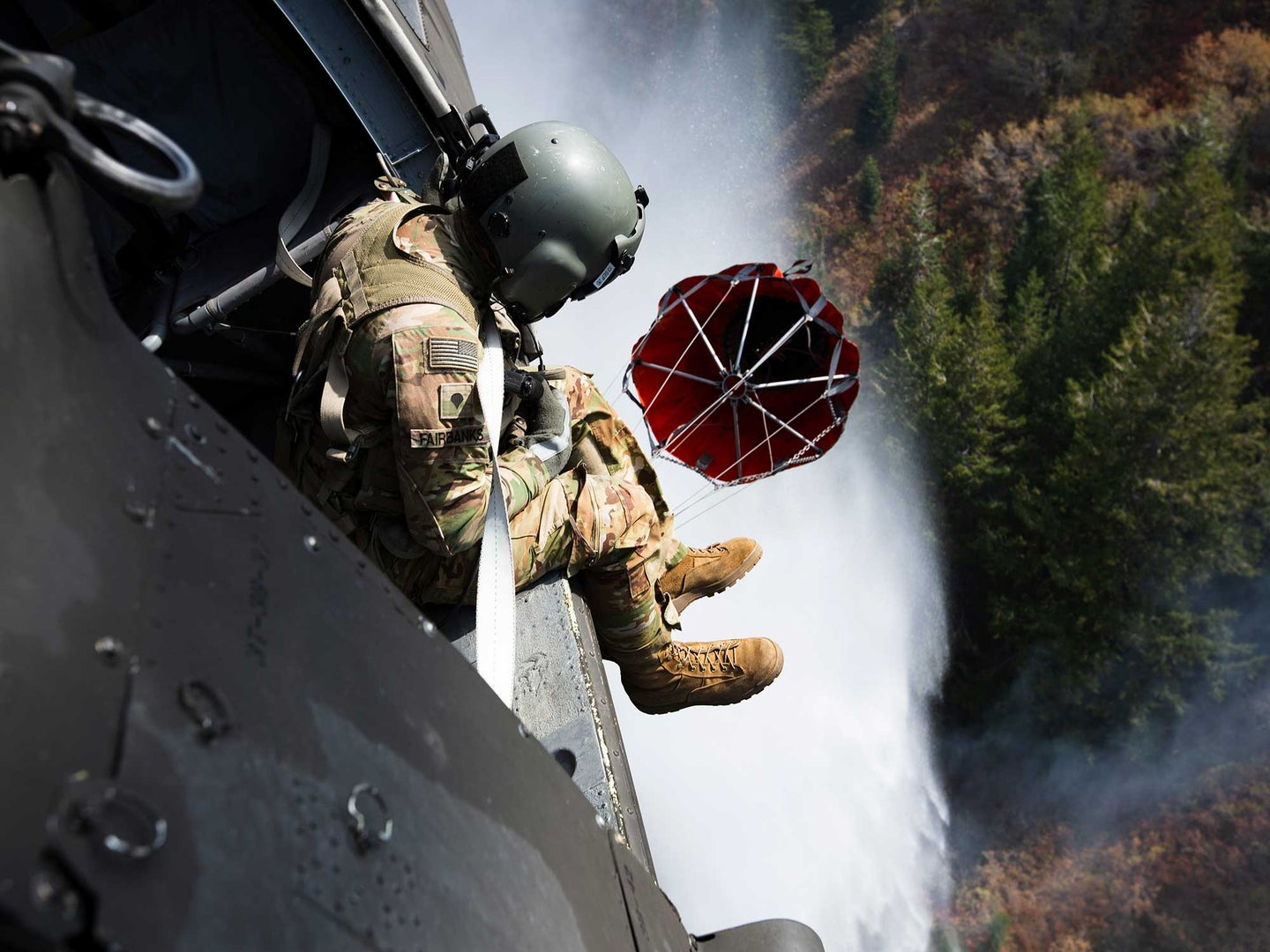 Editor’s Note: This article is part of War and Climate Week, a series of stories exploring how the U.S. military is coping with extreme weather, sea-level rise, and a warming globe.

Five years ago, the National Guard spent roughly 14,000 personnel hours fighting wildfires. By last year, that had increased to 170,000 hours.

And experts agree the trend is only getting worse.

“What does it mean for the National Guard to have spent 170,000 person hours in 2021? Instead of thinking about it as the worst fire year that the western United States has experienced so far, but perhaps the best fire year of the next 20 years going forward,” said Erin Sikorsky, director of The Center for Climate and Security. “It’s only going to get worse.”

The steep increase is just one example of how record-breaking weather and climate disasters are impacting the National Guard, who often serves as a response force to wildfires and hurricanes around the nation. Morgan Higman, an expert at the Center for Strategic and International Studies’ Energy Security and Climate Change program, told Task & Purpose that as we’ve watched “catastrophic natural and climate related disasters” increase, it’s “pretty reasonable to anticipate that the supportive needs to respond to those disasters will increase.”

Indeed, Paul Farnan, the acting assistant secretary of the Army for installations, energy and environment said earlier this year that troops are being called on “more and more often for humanitarian assistance.” And it’s not just the frequency at which they’re happening, but the severity of natural disasters that the National Guard is being called to handle.

Wayne Hall, a National Guard spokesman, said the “growing frequency and severity of hurricanes, wildfires, floods, and a global pandemic continue to challenge the safety of our citizens and communities,” and that the National Guard is “always planning and training …  to maintain a unified and rapid response to man-made and natural disasters.”

Gen. Joseph Lengyel, the former chief of the National Guard, echoed the same sentiment in 2017, saying the climate is “becoming more severe” and storms “are becoming bigger, larger, more violent.” And it’s not just the fact that the Guard often responds to those storms, but their facilities and equipment throughout the country and often in vulnerable areas.

As we’ve seen in recent years, extreme weather can result in billions of dollars worth of damage to equipment and installations.

Extreme weather events are far from the only things the National Guard has to prepare for. The thousands of hours the Guard logged to respond to fires last year, for example, doesn’t include the time dedicated to hurricane response, global pandemics, or civil unrest, on top of the military-specific requirements to include training or deployments.

And in many instances, those things have overlapped.

An article by Joan VanDervort published by The Center for Climate and Security in 2020 called the combination of COVID-19 with climate change impacts “the perfect storm,” as the pandemic collided with “existing readiness impacts on the Department of Defense … from the bruising impact of severe weather events, sea level rise, flooding, and wildfires fueled by climate change.”

“The entrance of COVID-19 onto the stage has compounded and accelerated the existing impacts on readiness from climate change,” wrote VanDervort.

Over the last two years, the National Guard has been called on to respond to the COVID-19 pandemic, assisting in testing and vaccination sites; civil unrest in response to the murder of George Floyd, and the Jan. 6 insurrection; the mission at the southern border which apparently included having guardsmen protect wealthy Texas ranches; not to mention the requests from states for guardsmen to fill in as school bus drivers and substitute teachers.

All of this is in addition to their response in 2020 to massive, history-making wildfires and destructive hurricanes amid an already-record-breaking Atlantic hurricane season that same year.

And while the trends for how disasters and weather events will impact the Guard are concerning at best, there have also been meaningful steps forward. Sikorsky, the director of The Center for Climate and Security, pointed to the Army’s Climate Strategy, the first ever to be released by the service, and the 2023 budget request which allocated $3 billion to bolster military installations against climate change.

Higman, with CSIS, explained that the Guard has “much closer opportunities” to work with state governments and local partners to get the resources they need, as they are a more localized force. And those partnerships between the government and private sector are “critical,” she said, because the solution for climate resilience likely isn’t going to come just from the National Guard.

“Governors in almost every state recognize that fire is bad, having water is good, having electricity is critical,” Higman said. “I think it’s actually a place where there’s a lot more … public-private partnership in a way that is really needed.”

Sikorsky agreed, saying the more local you get, the easier it is to understand the “risks and the response,” and having close relationships with state governments can make the Guard “better prepared to respond in those local communities.” But there can be a challenge in state governments as well, where depending on which state the Guard is operating in could change how seriously climate change is being taken and addressed in policy.

“Climate-driven wildfires don’t care who the governor is to a certain extent, they’re going to happen if they’re going to happen,” Sikorsky said. “So I think you’ll see more and more that states, regardless of political ideology, are just going to have to respond to what’s happening on the ground in their communities. And the National Guard will be a tool that they’ll turn to to help manage those responses.”