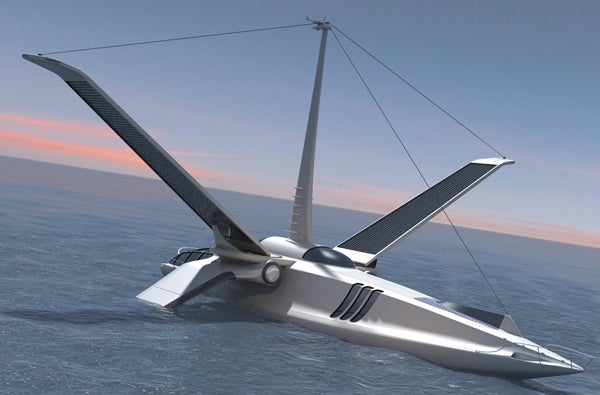 Volitan may look more like an X-wing fighter than a boat, but the four-wing structure keeps it stable while maximizing maneuverability.

For most of history, sailboats were by definition pollution-free. Now, however, even purists use outboard motors to get their three-sheeters in and out of the harbor. Including conventional motorized boats, there are more than 10 million hydrocarbon-burning marine engines in the U.S. alone. 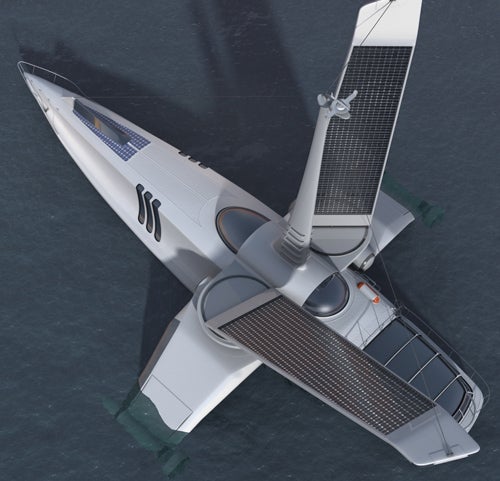 The sails are covered on both sides by flexible photovoltaic panels that power the electric motors, electronics and on-board water-treatment system.

A desire to make boating clean again inspired Hakan Gürsu and Sözüm Dogan of the Turkish design firm Designnobis to envision a zero-emission, engine-assisted boat that didn’t burn a drop of fuel—and was swank enough for the yachting set. Their solution is Volitan, a 105-foot concept sailboat powered by nothing but sun and wind. The ship’s strong, lightweight body is made from a composite of carbon fiber and epoxy resin and covered in carbon-foam lamination. Its two solid, solar-panel-covered sails, which extend from the ship’s body like wings (the boat is named after a flying fish found in the Mediterranean), catch wind when the sailing is good, and deliver electricity to the two 200-horsepower electric motors that propel the ship when the wind won’t cooperate. Controlled by an onboard computer, the wings rotate and tilt to track both the sun and wind. The energy they harvest is stored in conventional marine batteries that sit at the bottom of the boat’s centerboard and act as ballast.

The boat’s two electric motors are mounted at the end of two shorter, lower wings, which reach down into the water. In brisk wind, these wings fold up against the boat’s body to lower resistance and allow the ship to sail more easily. In a storm, the upper sailing wings fold against the boat, leaving the lower wings extended to provide stability. Additional stabilizing fins can also rotate out from the boat’s lower fins, allowing Volitan to operate safely in wind up to 60 knots.

Gürsu and Dogan clearly put plenty of effort into making their concept sexy; it took first prizes in both the Transportation and Nautical/Boats categories at the 2007 International Design Awards. Unfortunately, that award underscores the fact that Volitan is still just a concept. If it ever does get built, though, we suggest it be used as a hideaway for a James Bond evil mastermind—one who is highly conscientious about his carbon footprint.

Check out PopSci‘s complete coverage of the future of the environment at popsci.com/futurecity.