While scientists are still puzzling over the disappearance of bees, large numbers of bats have begun dying out no less mysteriously 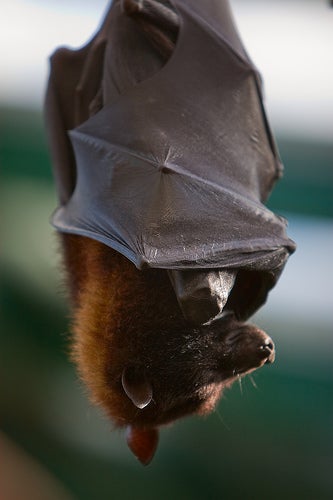 We’ve by now all seen the news that bees are dying in huge numbers. Scientists have labeled the phenomenon Colony Collapse Disorder, or CCD. Dead bees mean less crop pollination, which means less food at higher prices. What’s causing the problem is still anyone’s guess. Now, strangely, bats in the eastern U.S. are experiencing a similar plague which biologists have dubbed White Nose Syndrome (WNS) for the white fungus that appears on their bodies at the height of infection. Scientists are already calling it the worst disaster for bat populations in the United States, estimating the death of half a million animals this year alone.

As with CCD, biologists worry that WNS is a conflation of more than one factor and that the white fungus is merely a secondary infection. While signs point to a disruption in the bats’ food source—perhaps the recently introduced pesticides to combat mosquitoes that may carry West Nile virus—it is unclear whether WNS is caused by a toxin or simply a food shortage. In addition to (or because of) the infections, bats aren’t gaining enough weight before they hibernate and are either dying in situ or are waking up in the dead of winter and flying out into the cold to certain death.

There is concern that if the cause is contagious, it will spread rapidly. While humans are not vectors for infection, visitors to caves could be taking it out of caves on their clothes and gear. Bats themselves could do the job as well, migrating hundreds of miles in the summer to roost and give birth. While the economic impact of CCD is immediately apparent, the same may more subtly apply to WNS. Bats are known to consume large quantities of insect pests which would otherwise affect crop yields. How severely this may play out at this year’s harvests remains to be seen.