The DIYer extraordinaire presents his latest Wiimote hack: a dirt-cheap, interactive white board 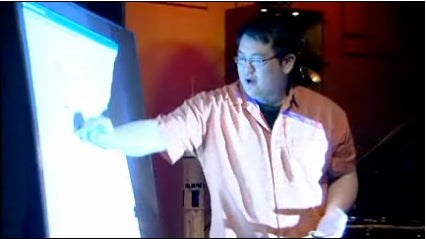 Nintendo Wii devotees are likely already familiar with Johnny Chung Lee as the guy who appeared one day last year on YouTube with a mind-bender of a demo on how to use the Wii remote and sensor bar to do head tracking. By placing the Wii remote at the base of a TV and attaching the sensor bar to a pair of glasses (and in conjunction with a bit of custom software), Lee made the three-dimensional images on screen respond to his position in space, appearing to float off in front of the screen. As it turns out, Lee is more than just a guy with a knack for understanding the Wii remote; he’s currently a graduate Ph.D. candidate in the Human-Computer Interaction Institute at Carnegie Mellon University. And he’s so impressed the gaming world with his developments that EA is bringing a Wii game to market this spring with a head tracking Easter egg.

Lee was recently invited to speak at the TED conference, where he wowed the audience with that same head tracking demo and then introduced a new one, wherein he was able to use the Wii remote to power a virtual whiteboard [below]. By combining the infrared camera in the remote with a homemade infrared led “marker”, Lee demonstrated how an inexpensive set of tools could result in a very expensive-looking piece of technology. This is the basis for the research he does—as he points out on his site, he’s not necessarily interested in gaming technology per se, but in how we interact with those technologies.

If you want to try and tackle either project yourself, Lee offers his software for free
here.