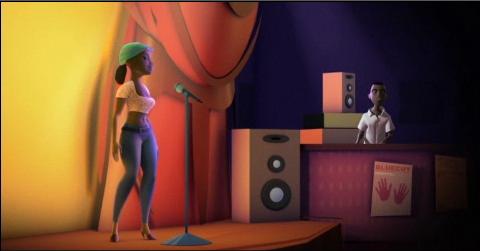 At CES, where Resident Evil 5 will soon be projected onto the side of Planet Hollywood, video games are everywhere. But some go beyond mere entertainment. During his keynote speech today, Intel chairman Craig Barrett talked about how technology can help people in the developing world. One of the most interesting efforts he mentioned: Warner Brothers Interactive recently created a PC game that uses an engaging story to teach Kenyan teens about HIV prevention.

Players guide the characters through various missions and games, and along the way, make decisions about whether to have sex and, if so, whether to use a condom. To help make its healthy message stick, the game tries to relate its story to players’ real lives. Characters listen to popular Kenyan hip-hop, play soccer, and wander through neighborhoods that look like Nairobi.

The game is currently being tried out at three test sites in Kenya, and behavioral psychologists from Emory University are studying the results to see if it helps reduce the risk of HIV. If it works, Warner Brothers may bring the game to more countries, altering the characters and the scenery to fit the locale.

This isn’t the only “game for good” at CES. Hope Lab is showcasing its morale-boosting game Re-Mission, which lets kids with cancer battle against virtual tumors. In a study published last summer, the game was shown to improve kids’ adherence to their treatment regimens. And an online game called Elf Island teaches kids about humanitarianism by linking actions in its virtual world to real-world non-profits. When players build houses, for instance, Elf Island will donate to a Habitat for Humanity effort.