Developer Brandon Fiquett is one of the first to hack Siri, Apple’s new voice command feature that we have previously... 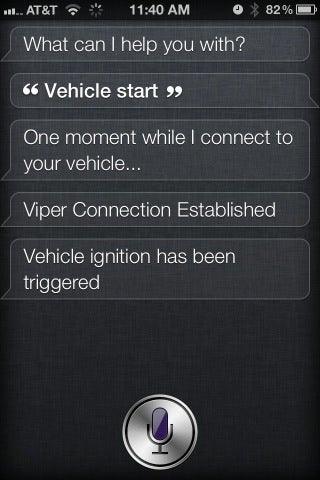 Developer Brandon Fiquett is one of the first to hack Siri, Apple’s new voice command feature that we have previously insisted is for your mom. But maybe not, given what this hack indicates is possible: Siri can be hacked to communicate with just about anything, and in this case has been persuaded to start a car with a simple voice command.

First things first: this is not a hack most people can replicate, not unless you’re familiar with a few different types of coding. But it’s not nearly the most complex hack we’ve ever seen–the early Kinect efforts were much trickier–and it’s very cool. Using the Siri Proxy, created by a hacker (possibly named Pete?) going by the name @plamoni on Twitter, Fiquett managed to get his Acura to communicate with Siri. The Acura has a Viper Smart Start System, which is designed to work with smartphones–all the easier for facilitating talks with Siri.

Fiquett has a custom PHP script that runs on his home server. Some custom plugins are used to augment Siri so it can recognize and respond in specific ways to specific commands. When one of those is sensed, it sends the command to the home server, which in turn spits it out to be recognized by the Viper. At first, Siri would only recognize some terse commands, specifically worded, like “vehicle start,” “vehicle disarm,” and “vehicle pop trunk.” Now, though, it responds to more conversationally-worded instructions–Siri’s real strength–like “start my car” and “pop my trunk.”

Fiquett calls this a “proof of concept,” and it’s definitely impressive that it works–but we’re even more excited to see what comes after this. It’s similar to the state of the hacked Kinect early on, with the twist that Apple is, to say the least, extraordinarily unlikely to release an SDK for Siri. But we’re still really looking forward to saying “Siri! Turn on all the lights in my apartment! Now turn them off! Now on again!” and then giggling.