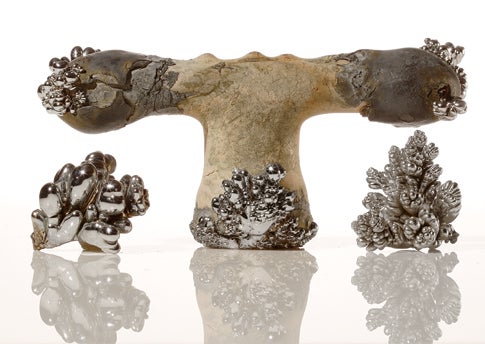 You may not want to rechrome a ’57 Chevy, but you can coat small objects using kits designed for plating jewelry. This $30 plating pen (pmcsupply.com) uses electricity the same as the bumper factory does, just with a couple AA batteries instead of a car-size transformer.

If there were a contest for most attractive industrial waste, these nickel-chromium nodules would win hands-down. As intricate as the veins on a leaf, brighter than a ’57 Chevy in the noonday sun, they grow naturally in tanks of chemicals simmering gently in a bumper factory somewhere in the Midwest. Eventually workers whack them off with hammers and dump them in barrels for recycling.

Bumpers are stamped out of steel and electroplated with a thousandth of an inch of nickel (for rustproofing) followed by 65 billionths of an inch of mirror-bright chromium (for shine). Everything you see is chromium, yet it represents no more than a millionth the weight of the bumper.

Electroplating uses electricity to turn dissolved ions into solid metal bonded to a surface. Bumpers sit in a vat of acid containing dissolved, positively charged nickel ions. A current is run through the solution, forcing negatively charged electrons from the bumper into each nickel ion, neutralizing it. The ions bond to the bumper, plating it with a very thin layer of solid metal. After the nickel is applied, robot cranes transfer the bumpers to tanks of chromic acid, where the same process adds a coating of chrome.

Titanium bolts and T-shaped wing nuts attach the bumpers to titanium frames carrying about 10,000 amps at around three volts. The bolts, nuts and frames are coated with rubber-like insulation, but it’s never perfect. Tiny cracks and nicks form over time, allowing electrons to escape and the metal to start depositing. Bumpers go through the line only once, but the frames and T-nuts are dipped repeatedly. Over dozens of chrome and nickel baths, these wonderful nodules build up.

In a week, the factory I visited turns tons of nickel and chrome into thousands of gleaming beauties. It also makes about 10,000 bumpers.