The Subatomic Assembly of H2

Tired of waiting for our fuel of the future to come of age? Grab a cup of water and a 9-volt, and read on. 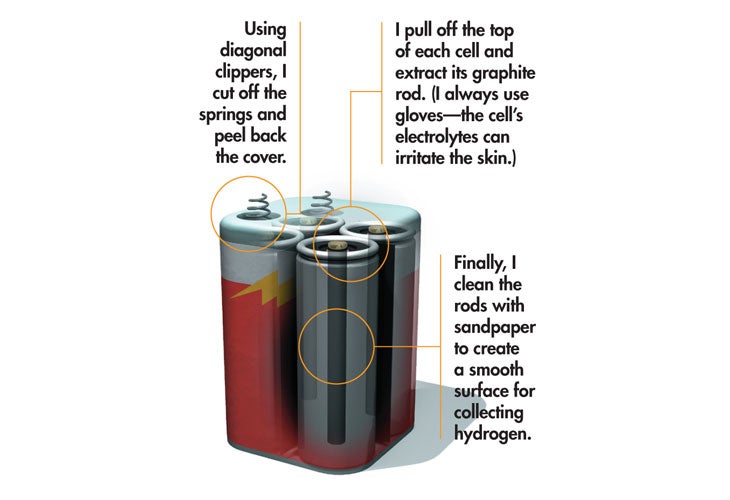 Hydrogen is going to be big! Sure, sure, you’ve heard that one before, but this time, just maybe, it’s for real. President Bush is touting it as our near-future Freedom Fuel, GM and Toyota are racing to bring the first production-model fuel-cell cars to market, and everyone and his hippie uncle is dreaming of a day when hydrogen-powered SUVs emit nothing but water vapor. There may even come a time when we’re able to produce it by harnessing energy from the sun, wind or waves instead of from natural gas. Meanwhile, though, as we await that glorious future, it’s easy enough to cook up some pure H2 on your own.

My first exercise in hydrogen production was to drop a 9-volt battery into a cup of water. (Hey, I was only 12–what do you expect?) Amazingly, it worked: I had managed to assemble pure hydrogen gas out of subatomic particles! The protons came from the water itself, which always has a bunch of them running around loose (naked protons are also called hydrogen ions). The electrons came from the battery. When I injected (well, plunged) the electrons into the water, they latched onto the protons to form a few small bubbles of hydrogen gas. Neat, but not very exciting.

From there I added salt to the water to increase its conductivity, thereby increasing the flow of current and the number of electrons available to pair up with all those wild protons. I crimped wires to the battery terminals for the same reason. Unfortunately, these corroded rather quickly, which is why I now use graphite rods: They last forever and are wonderfully cheap. For a long time I salvaged them from old lantern batteries (standard, not alkaline), pulling the carbon electrodes out of each cell. (I like this method because they come ready-made with wires attached, but you can also buy them in any welding shop.) Once they’re sanded clean and soldered to a 9V battery clip, they produce great billowing clouds of hydrogen (and oxygen–one gas from each electrode) for the life of the battery (which is only a couple of minutes–there’s a serious amount of current flowing now).

To determine which electrode produces which gas, hold a match near the surface of the water. The gas bubbling off the negative electrode crackles and flashes: That’s hydrogen. Although it’s flammable, you won’t generate enough with a 9V battery to make it dangerous. In fact, compared to gasoline, natural gas or propane, hydrogen is quite safe. Just don’t collect it together with oxygen in a container: That’s a dangerously explosive mixture. So explosive, in fact, that in liquid rocket engines the two components are mixed only just before the engine is lit.

ACHTUNG!
Theodore Gray is a scientist trained in lab safety procedures. If you try this on your own, you do so at your own risk.