The Military Wants A Way To Track Drones Flying Over Cities

Who watches the drones? Other drones 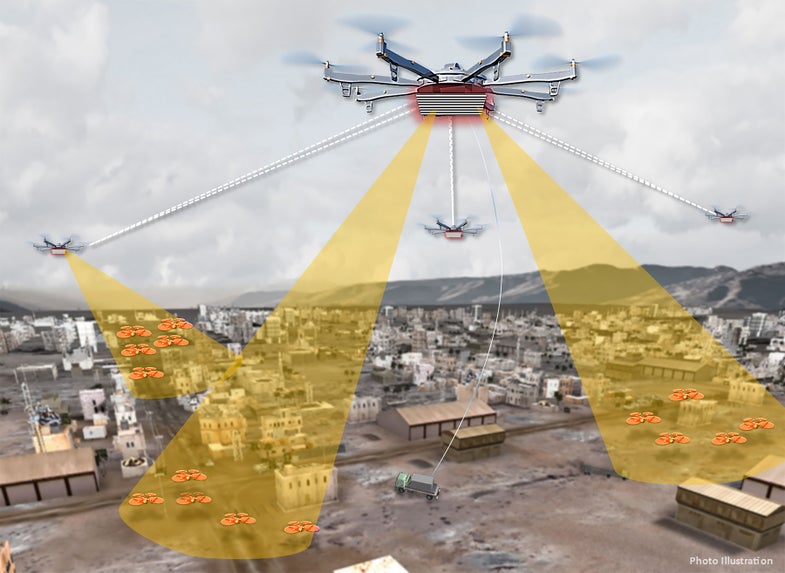 There is no good way to track the drones in the sky. Passenger airplanes and helicopters report their flights to air traffic control, and even if they didn’t, the vehicles are large and show up easily on radar, making it possible to keep an eye on them over land. Drones, especially commercial or hobbyist drones, are small enough to appear like birds on radar.

Drones are also new enough that there isn’t yet a system requiring them to broadcast their location to traffic control (or even, if such a system was devised, a guarantee that all small drones could power and obey it). The Defense Advanced Research Projects Agency (DARPA), the Pentagon’s future projects-wing, wants to change that.

A new project, announced today and with a solicitation posted on FedBizOpps, calls for an “Aerial Dragnet.”

In the announcement, DARPA notes the success of aircraft tracking tools and apps available easily online for large and fast aircraft. The drones of the low sky are a murkier challenge, but DARPA isn’t particularly known for picking easy tasks.

DARPA wants a map of all drones in the sky, especially unknown and hostile drones in war zones. NASA, which also has a project for tracking drones, wants a way for drones to comply with each other and laws in friendly skies.

To track the drones over a city, DARPA envisions “a network of surveillance nodes, each providing coverage of a neighborhood-sized urban area, perhaps mounted on tethered or long-endurance” on other unmanned aerial systems.

Or perhaps something else. DARPA wants the drone-watching dragnet to use affordable, low-cost hardware and existing sensors. To hear ideas, DARPA is having a proposer’s day in Arlington, Virginia, on September 26th.