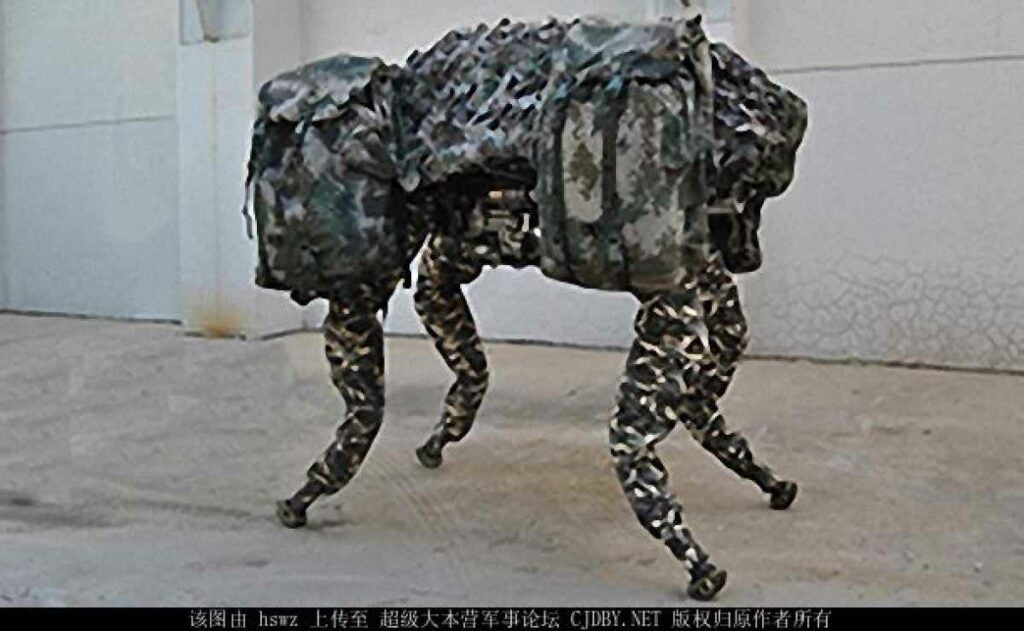 This photo from a robotics expo in August 2014 shows a four legged “robot mule” developed by NORINCO, which is similar to the U.S.’s LS3 robot.

Online videos have surfaced showing Chinese engineers testing, and playing around with, the latest Chinese walking robot. The Da Gou robot is a quadruped robotic “mule,” akin to the U.S. military’s “Big Dog” test robot, made by Boston Dynamics. Compared to wheeled supply-carrying robots, quadruped robots are designed to follow infantry into almost any terrain, while carrying up to 660 pounds of supplies, spare parts, ammunition, and even weapons. In the vision of their future use in war, such smart, legged robots would be instructed to accompany specific infantry units, follow the squad leader and even operate autonomously to run supply lines to them in the field, like a cybernetic cross between a mule and homing pigeon.

NORINCO, China’s largest land defense corporation, is currently building the Da Gou as a tech demonstrator. Da Gou currently can run at up to speeds of 3.7 miles per hour while carrying 110 pounds of payload. The testing is focused on improving the Da Gou’s speed, battery endurance (the goal is to have 24 hours of operation, compared to two hours on the current demonstrator) and software validation. Any operational descendent of the Da Gou will likely march alongside Chinese infantry and Special Forces, laden with supplies, on disaster relief, counter terrorist and peacekeeping missions.

Now For Something Else

It might look like robot abuse, but its a test to make sure that Da Gou can keep its balance in rough terrain, weather or the shock blasts of explosions.

And of course, NORINCO is likely to offer the Da Gou for sale. China has global ambitions to be a leader in military robotic exports, having already sold armed drones to Nigeria and Saudi Arabia. Expect also to see Da Gou baling about future battlefields in the coming decades.