Lexus's Mark Templin: "Our goal is to eliminate future traffic fatalities and injuries." 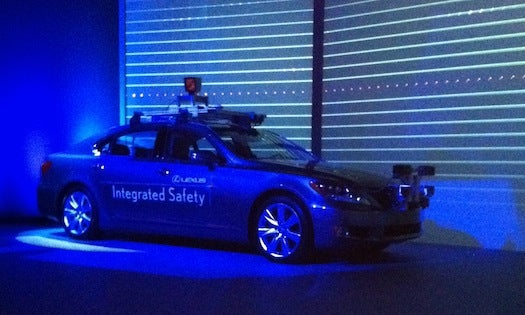 At CES today, Lexus showcased an “Advanced Active Safety Research Vehicle,” a souped-up LS being used as a testbed for autonomous car technology.

“Our goal is to eliminate future traffic fatalities and injuries,” Lexus’s Mark Templin said, standing in a press conference room lit like a Virgin cabin. And he believes autonomous–if not fully self-driving–cars are an important step forward.

The prototype’s technology is designed to help drivers avoid, or better react to, collisions. That incudes stereo cameras that can sense objects 150 meters away (including the color of a traffic light); GPS antennas that measure the car’s angle and orientation; and 360-degree rooftop laser tracking tech that detects things around the car, up to 70 meters away. “Our goal is a system that constantly perceives, processes and responds to its surroundings,” Templin said.

Templin emphasized that the prototype will not necessarily lead to a self-driving car. Autonomous tech should be carefully deployed to make drivers safer and more aware, he said–it doesn’t have to get rid of them altogether.

The prototype is still being tested and will not be commercially available “in the immediate future,” he said.