Vehicle-to-vehicle technology is about to get its first major real-world test in the U.S. The Department of Transportation awarded $14.9... 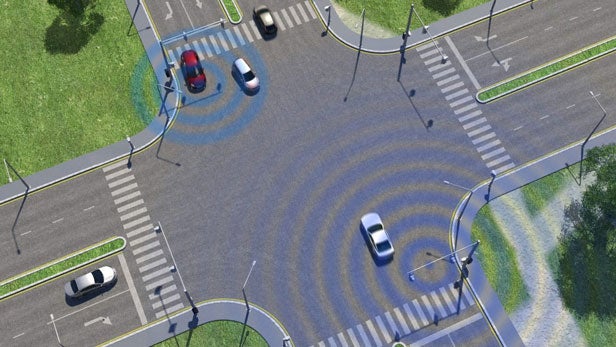 Vehicle-to-vehicle technology is about to get its first major real-world test in the U.S. The Department of Transportation awarded $14.9 million to the University of Michigan’s Transportation Research Institute last month, and the university is already moving forward with a plan to put 3,000 short-range radio equipped cars on the road in Ann Arbor over the next couple of years.

Ann Arbor, Mich., is a pretty ideal place for such a trial. It’s small enough that the cars are likely to encounter each other on the road fairly often, ensuring prodigious data output. Its proximity to America’s auto hub in Detroit doesn’t hurt either. But ultimately the initiative goes beyond the Big Three, involving eight automakers, many of whom began working together more than a decade ago to create a common platform for this kind of technology. The drivers will be selected from among the university’s 20,000 medical center workers.

The cars will communicate with each other and with some radio-equipped traffic infrastructure via short-range radio, which will broadcast things like each car’s GPS position, speed, and direction of travel to every other equipped car on the road.

The idea here is that cars that can share information will be not only more efficient but also safer. DOT thinks that 80 percent of serious, unimpaired collisions can be mitigated by technologies that let drivers (and cars) know when it might be unsafe to pass, when another car is approaching an intersection at an unsafe speed, or when an automobile several cars ahead slams on its brakes.

This kind of tech is also the precursor to a lot of future technologies considered to be the future of the automobile, like self-driving vehicles and automated traffic flow. The testbed will generate data for a year, after which the DOT’s National Highway Traffic Safety Administration will make a decision whether or not to approve the technology. If it does, vehicle-to-vehicle communications could become a pretty standard feature in as few as ten years.