When self-communicating connected cars start appearing on roadways, what will it be like for the humans? Will we tolerate our... 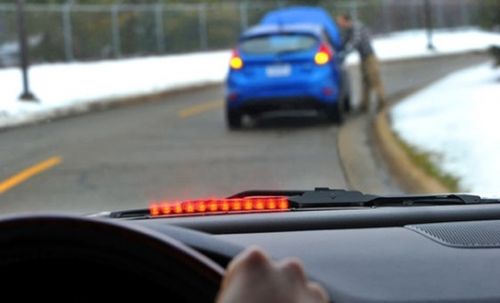 The red LED lights along the windshield base on the driver's side advise of danger ahead. U.S. Department of Transportation
SHARE

When self-communicating connected cars start appearing on roadways, what will it be like for the humans? Will we tolerate our cars talking behind our backs, deciding when to swerve or apply the brakes? The U.S. Department of Transportation is hosting some test drive clinics to help people prepare. Test drives on racetracks!

Starting in August, the Connected Vehicle Safety pilot program will enlist 100 drivers in six cities to test drive 24 cars equipped with short-range communication gadgetry. The equipment will allow cars to communicate with each other and with road infrastructure like traffic signals. The best part: The tests will take place on closed racetracks, to ensure driver safety.

The clinics start off at the Michigan International Speedway in Brooklyn, Mich., in August, before moving to Minneapolis in September, Orlando in October, Blacksburg, Va., in November, Dallas in December, and San Francisco in January 2012.

The cars’ communication devices are designed to warn their drivers of approaching hazards. Say a car up ahead stops suddenly because of an obstacle in the road; the car can pass this on to the vehicles coming behind it, giving a driver some extra warning and more time to hit the brakes. The image above shows a system of LED lights turning red to indicate an approaching obstruction.

The goal is to gauge how well drivers respond to this type of technology, according to the DOT. Eight major automakers will get to see the results: Ford, General Motors, Honda, Toyota, Nissan, Hyundai-Kia, Mercedes-Benz and Volkswagen, according to the Detroit Free Press.

Tests will take place in urban and suburban areas in different regions of the country, which should give DOT researchers a nice cross-section of Americans and our varied automotive habits. The DOT’s Research and Innovative Technology Administration and the National Highway Traffic Safety Administration partnered with the Crash Avoidance Metrics Partnership (CAMP) to lead the clinics.

Aling with testing new technology on a racetrack, test drivers will be paid $150 for one day of work, according to the Detroit Free Press. No word on how you can sign up, unfortunately.