Police in England will soon deploy 3-D laser scanners to the scene of car crashes, saving time and allowing wreckage... 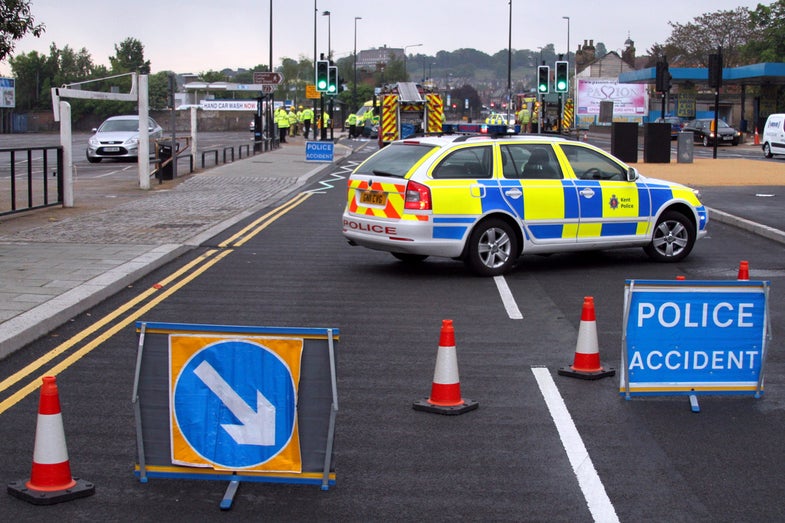 Police in England will soon deploy 3-D laser scanners to the scene of car crashes, saving time and allowing wreckage to be cleared from roadways more quickly. The 3-D accident reconstruction will also be more accurate than human-generated reports.

In the UK as in the US, a car wreck involving injuries or fatalities must be painstakingly recorded and preserved for insurance and court proceedings. Police investigators might block off the roadway for several hours as they take pictures of the scene and record measurements to log what happened. In the US, accident reconstruction is also big business, with experts retained by lawyers to discuss speeds, trajectories and impact physics.

The laser scanner will capture a 360-degree image of a crash scene, the BBC reports. Mounted on a tripod, a laser scans the horizon and records up to 30 million separate data points, down to sub-millimeter resolution. Each sweep takes four minutes, and investigators will typically make four sweeps, the BBC says. The image can then be processed into a 3-D computer model, allowing investigators to see where the vehicles are located relative to each other, tire skid marks, and other evidence.

In the US, some private accident reconstruction firms have also begun using laser scanners, but on a limited basis. Faro Technologies Inc., maker of several 3-D scanners, just last month held a webinar on how to use them for this purpose. It seems like such an obvious use for the technology, it’s a wonder it is not already widespread.

The UK Department of Transport provided $4.8 million (£3 million) to buy 20 of the scanners. For now, this particular system will only be available in England, BBC says.