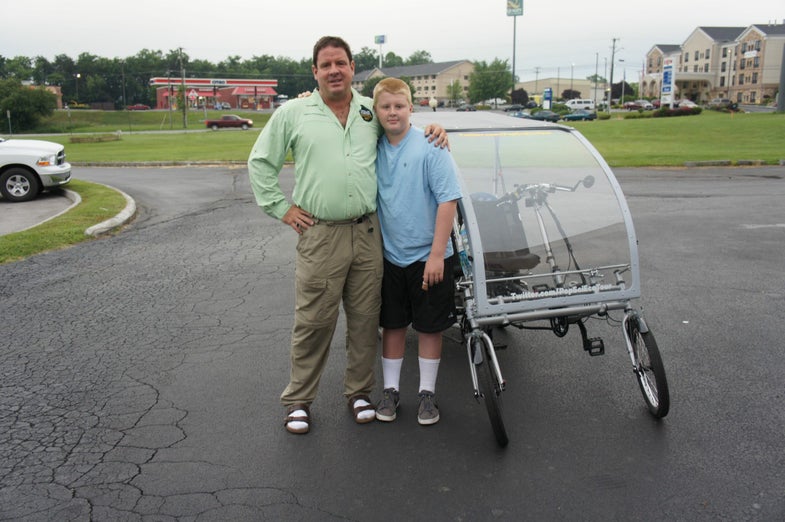 Pierce and Nash pose along side the EcoTour vehicle in Western Virginia. taken with the Sony NEX-5
SHARE

The first line of western Virginia’s 3,000-plus-foot peaks presented our first real challenge of the 2001 Ecotour, just as they did to the early pioneers moving westward. (You can make your own connections.) Fortunately, instead of having to slash our way over rhododendron-covered slopes, we could gear down and inch upward on paved roads.

After lengthy climbs on tree-shrouded, two-lane roads, our reward was a mountaintop meadow known as a bald. The origins of these high altitude clearings remains a subject of debate among biologists, but whatever the explanation, these open summits provide a rare chance to see beyond the trees, and to pause and enjoy the breezes that often sweep the ridgelines.

The central Appalachians receive the highest average wind speeds on the mid-Atlantic seaboard–a fact that hasn’t escaped the notice of certain developers. Some 100 miles to the north of our vantage point, the Beach Ridge wind farm stretches across 15 miles of West Virginia mountaintops. When completed, it will include 119 wind turbines, each capable of generating 1.5 megawatts of electricity.

Closer to our tour route is Virginia’s Red Oak Knob, which is the proposed site for the region’s newest wind farm project. The backers of the Highland New Wind Development call it the greenest wind farm in the world. That claim has less to do with the nature of the turbines they’re planning to build and more to do with the windy conditions of the area itself. One criticism voiced by opponents of wind power is that these facilities intrude not only on the landscape but also on the accessibility of the land itself. In the case of the Highlands project, however, there will be no net loss of wild or public lands, and no deforestation. The ridge tops where turbines will be erected have a long history of commercial use, including grazing, logging and gas exploration. Compared to these historic uses, a wind farm provides a low-impact, environmentally friendly alternative.

In the long term, wind farms may be able to produce a significant portion of our nation’s electrical energy demands. But even in the short term, each new project that comes to fruition helps reduce our nation’s dependence on fossil fuels. The Highlands project, for example, will generate enough electrical energy to power some 12,000 homes. When the wind turbines are turning, gas and oil-fired plants can cut output, which results in fuel savings and a corresponding drop in emissions.

There will always be some who consider wind turbines to be blights on mountain vistas. But considering the alternatives, I’m OK with sharing the ridge tops with a few windmills.