As if it further needed to drive home its eco-friendly, anti-oil message, the Chevy Volt will soon boast a body... 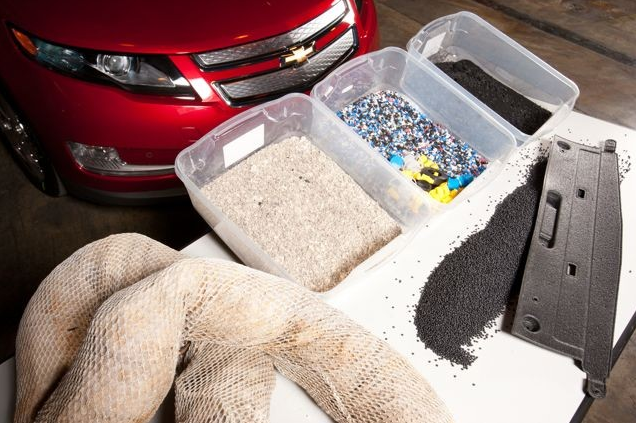 As if it further needed to drive home its eco-friendly, anti-oil message, the Chevy Volt will soon boast a body made partially of recycled equipment originally used in the Gulf oil leak cleanup efforts. Specifically, GM will use recycled plastic from oil booms, which are sort of floating containment walls meant to keep oil in one place.

Oil booms are, generally speaking, tube-shaped cylinders of netting which contain some material used to block the spread of oil. In the case of the Gulf oil leak, most of that internal material was polypropylene, an oil-absorbent plastic–and an awful lot of it was used, saturated with oil, and discarded. But GM is taking a multi-step process to recycle that plastic.

Heritage Environmental, a waste-disposal company, collects the booms, then passes the polypropylene to Mobile Fluid Recovery, which spins the material to separate the plastic from the oil and wastewater. Then Lucent Polymers treats the oil-less plastic, passes it to a GM plant which creates parts from it, and then to a GM assembly line.

The final product will make up about 25% of an internal part used to direct air around the Volt’s radiators, which sounds kind of negligible until you realize that this recycling will save over 100,000 pounds of polypropylene from ending up in landfills. And, of course, it’s another way for GM to sort of ironically note how environmentally-friendly the Volt is.