It was something of a photo finish, but the winners of the Automotive X-Prize are in. Taking top honors: Edison2’s... 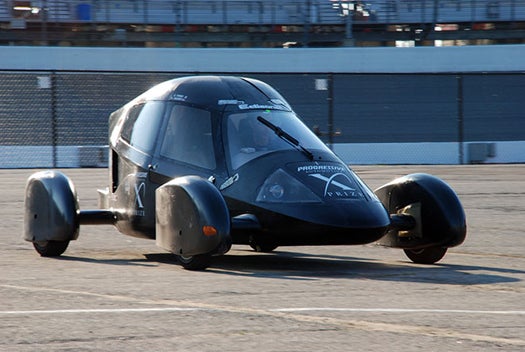 It was something of a photo finish, but the winners of the Automotive X-Prize are in. Taking top honors: Edison2’s “Very Light Car No. 98,” a single-cylinder gas/ethanol burning four-seater that gets 102 miles per gallon of fuel. Edison2 took home half of the $10 million prize while two other teams split the other half.

Edison2’s victory hinged on the team’s innovative use of lightweight materials and superior aerodynamics. VLC98 is built on a steel frame but uses aluminum wherever possible, keeping the weight at a mere 830 pounds, feather-light for a four-seater. Their choise of a one-cylinder combustion engine rather than an electric motor saved them weight as well, as batteries add a lot of weight.

Edison2 doesn’t plan to market the car in its current incarnation, but the technologies refined in its development could inform a future commercial model. Meanwhile, both of the two other prize winners are taking orders for their electric cars. North Carolina-based Li-Ion Motors’ Wave2 – a two-seater that gets 187 miles on a single charge – netted the company a cool $2.5 million in prize cash. X-Tracer, a Swiss team from Winterthur, won another $2.5 million with its electric mini-car, the E-Tracer. The motorcycle like auto gets an even better 205 miles per charge and should be available in the U.S. next year.

Check out a short doc on Edison2’s winning entry below.