An electric-car holdout decides to dazzle the zero-emissions scene 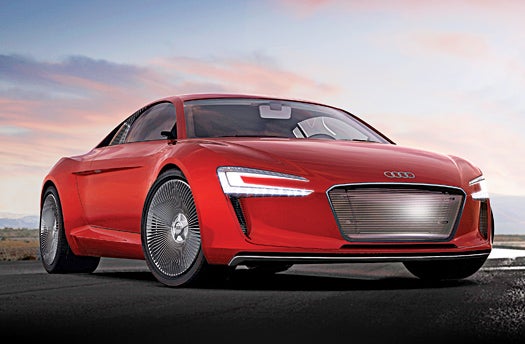 In September, Audi of America president Johan de Nysschen called the Chevy Volt a “car for idiots” and said that electric vehicles were “for the intellectual elite who want to show what enlightened souls they are.” Audi must have felt the need to atone for the harsh words, because the following month the German carmaker announced that it would build the baddest electric car yet: the E-tron, an all-electric supercar that could go on sale in the U.S. in two to three years. “I expect we will see running examples in the next 24 months,” erstwhile electric-hater de Nysschen told a reporter.

That could give electric-sports-car maker Tesla Motors some competition. The gas-powered Audi R8, on which the E-tron is based, is one of the hottest cars on the planet. Why go to the relatively unproven Tesla for a $101,500 roadster when you can get an Audi R8 with batteries where the engine used to be?

Aside from proving that you are a member of the intellectual elite possessed of an enlightened soul, one of the most appealing characteristics of electric drive is the massive, immediate burst of torque that only electric motors can provide. The E-tron seems designed to exaggerate this perk. The car will have not one but four electric motors, one for each wheel. Together they will produce a spine-snapping 3,319 pound-feet of torque, which means its tires will spin with three times the force as those on the Bugatti Veyron 16.4, a 1,001-horsepower monster that makes 922 pound-feet of torque. Top speed will be limited to 124 mph, but that will just keep you out of jail. And after all, an electric car’s range is limited by the amount of energy the battery can hold, so preserving energy is essential for getting back home; the E-tron will be able to travel 150 miles on a full charge.

In concept form, the E-tron is loaded with far-horizon technology: gadgets that communicate with other cars, stoplights, road signs, and so on. We don’t expect all that to make it to production, but no matter. Any serious rendering of the concept you see here will be the first electric car worthy of a poster on a teenager’s bedroom wall.