Then why the push to develop the Chevy Volt? 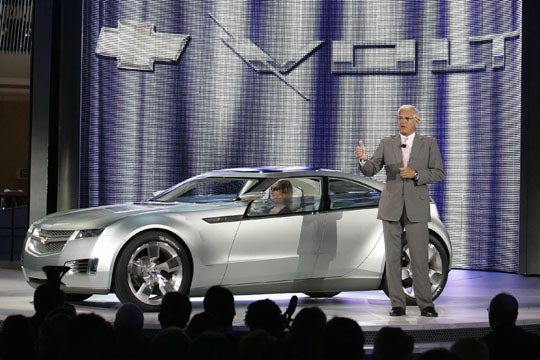 (Actually, the writer for D heard these comments in a “closed door session with several journalists,” which makes me wonder whether this whole thing was supposed to be off the record.)

Anyhow, this doesn’t mean that GM isn’t serious about building the Volt, of course—just that global warming isn’t the reason. And that’s fine. GM doesn’t have to have noble intentions as long as it delivers the fuel-efficient cars it’s been promising. According to D, Lutz says he’s excited about the Volt because “it’s the last thing anybody expected from GM.” But you have to wonder how statements like this affect public perception of the Volt project. Because right now, if you ask a car geek about the Chevy Volt you’ll get one of two responses. The most predictable: “Total vaporware, it’ll never happen.” A cautiously optimistic few, however, will admit that General Motors really does seem serious about building the Volt. After all, they’ve staked the reputation of the company (which lost $38.7 billion dollars last year) on their ability to start producing this extended-range electric car by the end of 2010.

And again: It doesn’t matter why GM wants to build the Volt as long as they actually build the thing. But it would be a shame for GM if Lutz’s comment sent some of the optimists back to the Volt-is-vaporware camp.