A British Man Built A Chariot Out Of Drones

Just look at this thing 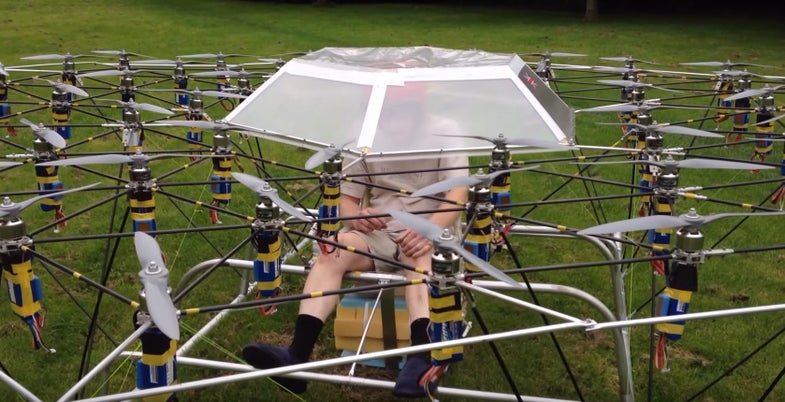 “Never intended for making a significant journey or flying much above head height” reads the disclaimer below the video of “Swarm Man.” The aircraft looks improbable – the kind of machine a middle schooler would sketch out, then attempt to build from old childhood toys. It features no less than 54 counter-rotating propellers, all linked together is a hexagonal formation. With a Union Jack sticker on it giving a hint to the inventor’s nationality, the DIY flying machine looks like it shouldn’t work. But it does:

The Swarm Man’s vehicle can reach heights comparable to that of a child on a basketball player’s shoulders, too, but it’s a struggle to stay there:

Each rotor is just 18 inches in diameter, and powered by an engine designed for a remote control plane. There’s room in the center to fit either a pilot or six more rotors, and in the flight tests, a plastic dome serves to protect the human inside from both blades and rain. Future versions of the craft may include a tail for better turning, since sharp turns in the craft seem tricky.

It appears the craft was built more for novelty than any functional purpose. Novel flying machines have found their way from backyard oddities into serious consideration before, as the U.S. Army’s perpetual quest for a working hoverbike illustrates.

Watch the full flight of the Swarm Man below: