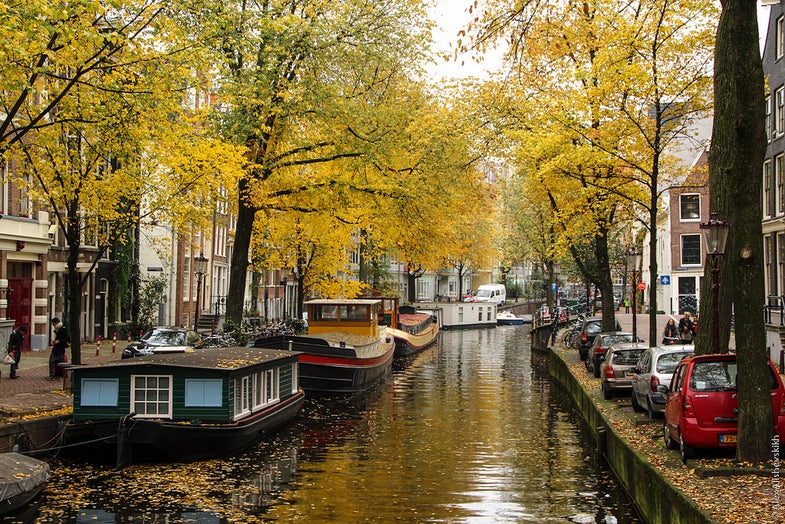 Going green can be a rather thankless effort. Nobody pats you on the back for your reusable water bottle, diligent recycling efforts, and insistence on buying local. But one Dutch entrepreneur wants to reward residents of Amsterdam for their efforts to bring down air pollution. And he’s doing it with birdhouses.

Well, not actual birdhouses. The project, conceived by Joris Lam, is called TreeWifi, and the birdhouses in question contain nitrogen oxide sensors and Wi-Fi routers rather than living space for feathered critters.

The devices are mounted to trees around the city, and LED lights indicate air pollution levels in the immediate area. When pollution levels dip below a specific threshold, the roof of the device glows green indicating that free Wi-Fi is available to passersby.

The goal, according to the company’s website, is to reward residents for choosing to ride their bikes or take public transportation rather than drive. The company hopes to put a birdhouse on every street in Amsterdam to help the city’s residents get tangible feedback for their collective green choices, and perhaps even encourage them to organize car free days. Another benefit of the project, the company says, is that it will provide pollution data on a hyper local scale that can be provided to researchers.

Earlier this year, TreeWifi won first place in the Awesome Foundation Amsterdam pitch contest, and Lam and his team are now crowdfunding the project to help bring to to neighborhoods around the city.