One Charger to Rule Them All

A nonvolatile fuel cell promises to soothe your battery woes 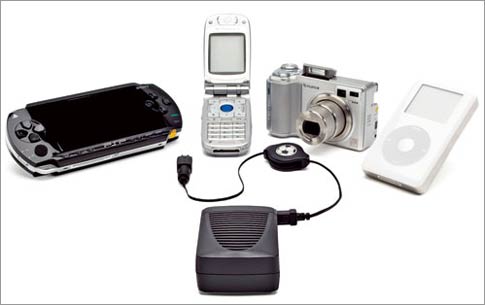 If you travel frequently, you’re probably lugging around a clunky array of backup batteries for all your wireless gizmos. Soon you’ll be able to lighten your load with Medis Technologies´s new nine-ounce disposable Power Pack. When your iPod dies mid-flight, you can plug it in for a full on-the-spot recharge. The 1.3-watt device will do this five times. It will also deliver five full charges for your digital camera or 20 hours of talk time for your cellphone before it’s spent. All told, Medis says, it’ll last 15 times as long as other portable rechargers on the market.

The key is a streamlined fuel cell that converts chemical energy into electricity. Although fuel cells pack more power than batteries, most run on methanol–a highly volatile liquid. More to the point, you can´t carry methanol on an airplane. The Power Pack uses a mixture of
glycerol and sodium borohydride as fuel; it is non-explosive and doesn’t require a complicated membrane to force a reaction. Such simplicity makes it inexpensive to manufacture.

Medis (medistechnologies.com) hopes to have the Power Pack on shelves by early next year (it
will cost about $20), with a refuelable version available by 2007–just enough time for you to master all those battery-sucking features on your new smartphone.

FUEL-CELL ANATOMY
The Power Pack uses oxygen and sodium borohydride to create electricity. Once activated, it draws in air at the cathode to create hydroxide ions [A]. these ions travel through an electrolyte to the anode. there they react with sodium borohydride to
make electrons [B] that flow through a circuit, creating
a current [C]. when the electrons hit the cathode, they mix with oxygen to create more hydroxide ions.