Why Researchers Are Putting 3-D Glasses On Praying Mantises

"Just for fun" is not the answer. We think. 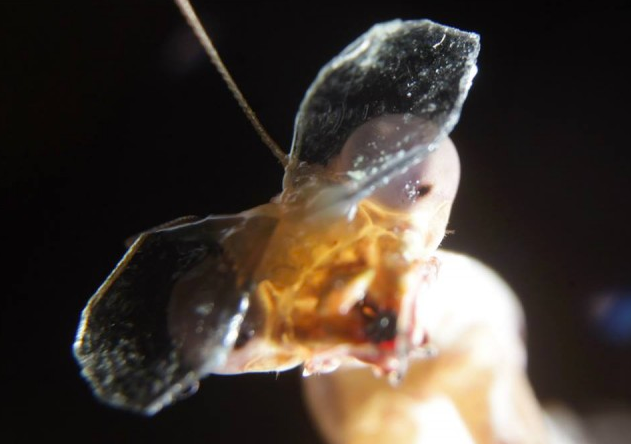 In a move that’s sure to shake up the burgeoning IMAX-for-insects industry, researchers have got funding to study the vision of praying mantises and are affixing the world’s smallest 3-D glasses onto the creatures to better understand their superb ocular abilities. It may sound like one of those projects that gets called out by conservative politicians as a waste of money, but it could actually teach us about the evolution of 3-D vision, answering questions such as: How is the mantis’ 3-D vision different from ours, or that of other vertebrates? Did it arise independently? How can an insect with a tiny brain see so well and react to its environment so quickly?

If you aren’t impressed with the abilities and/or chutzpa of praying mantises, check out this one attacking a hummingbird. Another YouTube video purports to show a mantis eating a bird it just snagged.

Here’s a video describing the research:

“Despite their minute brains, mantises are sophisticated visual hunters which can capture prey with terrifying efficiency,” project lead Jenny Read, a researcher at Newcastle University in England, said in a statement. “We can learn a lot by studying how they perceive the world.”

After putting the glass on the mantises, researchers show them a series of shapes on a screen that are designed to look 3-D with the glasses on. The goal is to fool “a mantis into believing it’s seeing something that’s a likely prey object,” project researcher Vivek Nityananda told PRI. “Just a black dot on a white screen, or a black square, that moves around in a particular way.” This will allow researchers to judge their depth perception and other aspects of their vision. Results from the study could help researchers design 3-D technology for animals, humans, and robots.