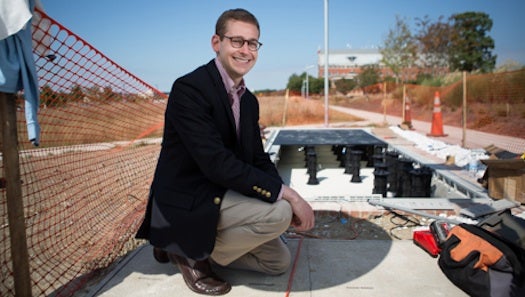 Just in case those little solar-powered garden lights are not cool enough for you: The George Washington University has installed a 100-square-foot stretch of walkway that’s covered entirely in solar panels. In a year, the solar sidewalk should make about 470 kilowatt-hours of electricity, according to numbers from Onyx Solar, the walkway’s maker. That electricity will power the 450 LED lights inside the panels that will light the walk at night.

This is “the first installation of walkable solar paneled sidewalk in the world,” the university’s senior land use planner, Eric Selbst, said in a statement.

What makes a solar panel walkable is that it’s non-slip and is able to withstand weather and foot traffic. This particular walkway will see students on their way between Exploration and Innovation Halls on campus.